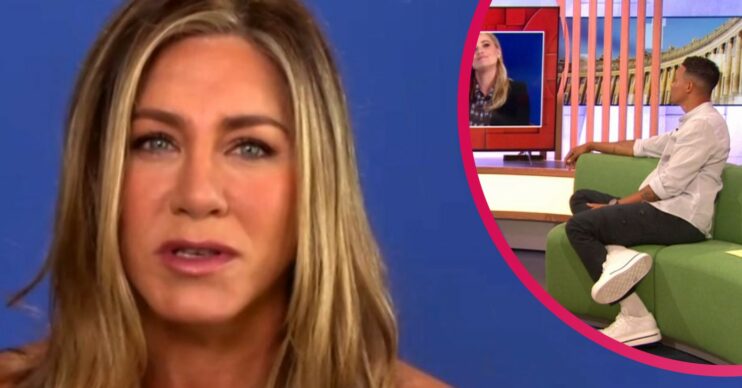 The One Show: Jennifer Aniston interview branded ‘awkward’ by fans

The Morning Show star didn't seem pleased to be there

Hollywood royalty appeared on The One Show last night (September 8) when Reese Witherspoon and Jennifer Aniston called in for a chat.

The former Friends star was appearing alongside the Big Little Lies actress to promote The Morning Show season 2.

However, it didn’t exactly go quite to plan.

Viewers were left baffled by how “awkward” the interview appeared to be, and Jennifer looked anything but pleased to be there.

Jennifer stars as Alex Levy, co-host of a popular breakfast news programme, who fights to maintain her spot as top news anchor amid a rivalry with Reese’s character, Bradley Jackson.

What did Jennifer Aniston say on The One Show?

Awkwardness ensued when The One Show host Jermaine Jenas asked Jen if she was a morning person.

Jennifer, who confessed she “hated” live TV, appeared to dodge the question, and Jermaine quickly turned to Reese for help.

Jennifer then interrupted, saying: “Did I sell that to you?”

Viewers at home rushed to comment, with many confused by Jen’s seemingly standoff-ish attitude.

One person wrote: “Jennifer Anniston’s ‘tude in this interview is cringe. She keeps on looking to the side awkward #theoneshow.”

Meanwhile, a third said: “Did anyone else catch Jennifer Aniston’s negative reaction to the male presenter regarding the morning person bit? Awkward #theoneshow.”

“Am I sensing a wee ‘attitude’ here? #TheOneShow,” added a fourth.

However, others loved seeing Jennifer on the show.

One tweeted: “Jennifer Anniston is always so great in interviews. Really articulate and seems so lovely.”

Meanwhile, co-host Zoe Ball spoke about the interview on her BBC Radio 2 show this morning (September 9).

She said: “Jennifer Aniston was on the show with Reese Witherspoon.

“We’re still all just getting over that moment of talking to Jennifer Aniston.”

The Morning Show returns to Apple TV+ on Friday, September 17.

Jennifer Aniston The One Show