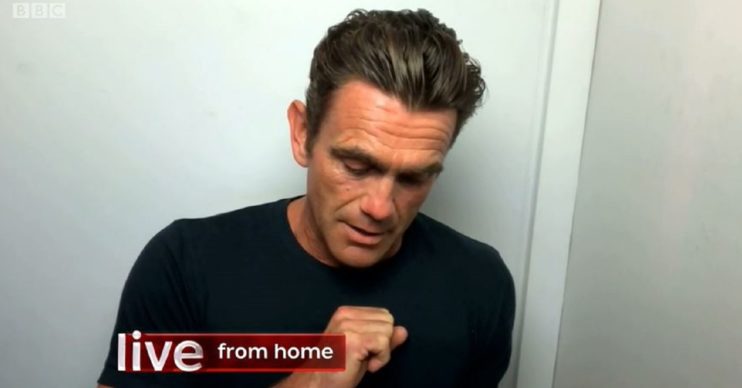 The One Show: EastEnders actor Scott Maslen chokes up over message from NHS nurse

Actor Scott Maslen choked up on The One Show last night as he held back tears after receiving a message from an NHS nurse live on air.

During Wednesday (May 13) evening’s episode, the EastEnders star was on to chat about a project he has been involved with during the coronavirus pandemic.

The Jack Branning actor has been helping to cook food for NHS workers under an initiative called You Donate, We Deliver.

What did Scott say about the project?

He explained: “Listen, it’s not me that’s got this thing going. It’s a group of friends, four friends who basically, when the [pandemic] kicked off… a couple of them have friends and relatives working within the NHS.

“They were seeing what the issues were and it was a simple thing of them not getting food. Working these ridiculously long hours and then having to go out and get food in conditions where they were having to queue, or everyone was buying everything.

God bless you all.

“We all know what the stories were. So they started making food for these amazing people.”

Stand-in host Michael Ball told Scott that he had seen a picture of a shepherd’s pie he made and admitted it looked amazing.

“I’ve got proof that it’s a result,” Michael said. “We’ve tracked someone down, a lady called Mary who’s been enjoying it.”

The One Show then aired a clip of the health worker’s video message.

“Hello Scott, my name is Mary,” she said. “I’m one of the nurses at Highgate Mental Health Centre. You can imagine my surprise when I heard you are the secret chef preparing the shepherd’s pie we have been receiving.

“We say thank you to you and to the team, for your love and thoughtfulness. God bless you all. Keep the shepherd’s pie coming!”

Scott appeared emotional after watching the clip and presenter Alex Jones asked him: “It must be really lovely to hear from somebody who’s actually eaten your cooking. Are you having help at home or is it just you?”

But he choked up and added, “Oh my god,” before taking a deep breath and pausing to collect himself.

“Oh bless you,” Michael cut in. “It show’s you’re making a real difference.”

Scott’s reaction had viewers emotional too, as one said on Twitter: “@RealScottMaslen so nice to see on #TheOneShow. Got emotional myself, Scott. May god bless you and your team. You’re doing an incredible job at this most ever difficult time.”

Another said: “Have just cried watching you on The One Show #TheOneShow. Fantastic work Scott! You’re amazing! Keep it up!”

A third wrote, alongside crying and heart emojis: “Scott Maslen is such a brilliant man #TheOneShow @RealScottMaslen.”

Have just cried watching you on The One Show #TheOneShow 😭 Fantastic work Scott! You’re amazing! Keep it up! 💗💋💋💋

Scott Maslen is such a brilliant man 😩❤️ #TheOneShow @RealScottMaslen

– The One Show airs weekdays at 7pm on BBC One

What did you think of Scott’s interview? Leave us a comment on our Facebook page @EntertainmentDailyFix and let us know.

EastEnders Scott Maslen The One Show