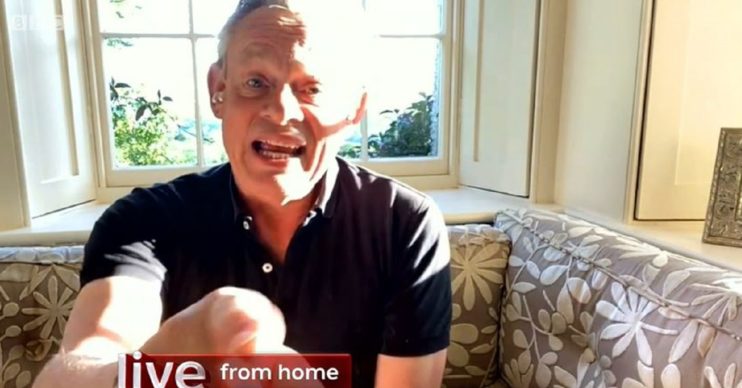 Presenter Alex Jones was stunned on The One Show when guest Martin Clunes appeared to take a surprise dig at her co-host, Michael Ball.

Actor and singer Michael is presenting the talk show this week with the Welsh favourite, who is the show’s only permanent host now that Matt Baker has left.

What did Martin Clunes say?

During the conversation, Martin took a moment to heap praise on Alex and thank her for continuing to do the programme during the coronavirus pandemic.

And then he unexpectedly took a swipe at Michael.

Alex said in their interview: “Martin, it’s lovely to see you, as always.”

Yesterday was International Nurses Day 2020 and Martin felt that Alex should also be commended. He said: “Alex, can I just say, nurses aside, you’re amazing. You’re on every single night.”

Sat opposite any old flotsam.

He added: “Sat opposite any old flotsam.”

Michael took it in his stride, as he smiled and joked: “So true.”

Some viewers at home picked up on the dig, with one tweeting: “Watching @BBCTheOneShow and Martin Clunes calling the guest presenters working with @MissAlexjones ‘any old flotsam’ made me die. The show always gives a good, well needed laugh! @mrmichaelball you took it well #TheOneShow.”

Another wondered: “#TheOneShow is there negative history between Clunes and Ball? Seemed a bit frosty.”

#TheOneShow is there negative history between Clunes and Ball .Seemed a bit frosty

It follows confusion earlier this week when The One Show changed channels in a scheduling switch-up.

It usually airs weekdays at 7pm on, as its name suggests, BBC One.

But Monday (May 11) evening’s episode instead aired on BBC Two.

The BBC switched up the schedule to show a BBC News special on Prime Minister Boris Johnson’s latest message on the coronavirus pandemic.

It filled The One Show’s usual 7pm slot, meaning the popular talk show had to be shown on BBC Two instead.

Elsewhere on The One Show this week, Prince Harry made a surprise appearance.

The Duke of Sussex featured in a video call to chat with – and pay tribute to – two groups helping wounded veterans.

Royal fans were delighted, though some viewers at home took issue having Harry back on their screens following his move to Los Angeles.

BBC Martin Clunes The One Show