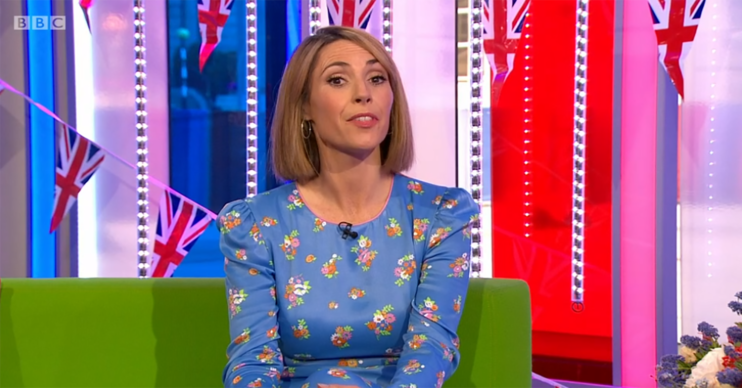 Alex insisted she had a trim back in February

TV’s Alex Jones has hit back at speculation she got her hair cut during lockdown.

A hairdresser wrote on Twitter that they thought The One Show host has had her hair cut professionally.

They said: “@BBCTheOneShow as a hairdresser, I’ve seen @MissAlexjones has had haircut, with social distance law, HOW!!?”

However, Alex hit back: “Just to clarify, no haircut has happened since the end of Feb, before lockdown (which was a tiny trim).

“I’m sort of pleased that you think I have had it cut though because it’s a right mess!!!!!”

Just to clarify, no haircut has happened since the end of feb, before lockdown(which was a tiny trim). I’m sort of pleased that you think I have had it cut though cos it’s a right mess!!!!! https://t.co/594PJoQAUn

Alex is still hosting The One Show with social distancing measures in place.

The star has been presenting the BBC One show with Gethin Jones and Huw Edwards after her co-star Matt Baker quit.

Just to clarify, no haircut has happened since the end of Feb.

Earlier this week, Alex was in tears over actor Christopher Eccelston’s touching tribute to NHS workers, a poem penned by a fellow Salford resident.

Tribute to the NHS

Piano music then accompanied Chris’s reading of the poem.

He began: “I’ll tell you a tale that’s been recently written, of a powerful army so Great it saved Britain.”

He continued to talk about the valiant efforts of “our soldiers in blue” to save the lives of those infected with COVID-19. As he spoke, a montage of doctors and nurses played on the screen.

Christopher concluded: “So let’s line the streets and remember our debt. We love you, our heroes. Lest we forget.”

When the camera cut back to hosts Alex and Gethin on the sofas, Alex was visibly emotional as she struggled to speak through tears.

She said: “Thank you so much, Chris. Very, very touching indeed, wasn’t it? I bet I’m not the only one!”

Alex Jones Lockdown The One Show