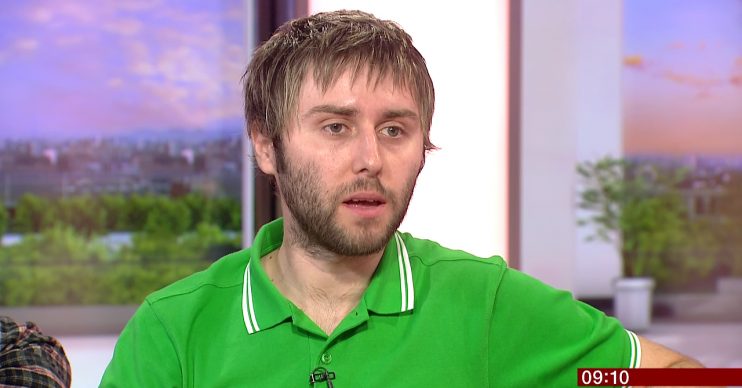 He was invited on to talk about his anxiety

James Buckley turned down an invitation to talk about his anxiety on This Morning because he believes the ITV daytime show has “baited people that probably have mental health problems to make entertainment”.

Back in June the Inbetweeners star – who played Jay Cartwright in the E4 comedy – bravely opened up on how he was left feeling “anxious’ and “uncomfortable” with the constant attention that comes with being famous.

He admitted it was affecting him so much that he would sometimes avoid leaving the house.

Read More: James ‘Arg’ Argent is told he is ‘morbidly obese’ after gaining 10 stone in 2 years

In the wake of his admission, James was contacted by the production team on This Morning to go on as a guest and talk about his issues with hosts Phillip Schofield and Holly Willoughby.

But he spurned the offer because he doesn’t agree with how the show has treated celebrity guests like Kerry Katona who have mental health problems.

Speaking on his Complete Load of Podcast, he said: “I was asked to go on This Morning and daytime TV shows and chat shows to talk about it.

“I’m like, ‘I did talk about it. You didn’t report it properly and it made me even more anxious and depressed.”

I discuss the inbetweeners reunion in the latest episode of complete load of podcast. Link to the video on my YouTube channel, or search Complete Load of Podcast on iTunes and all that stuff #inbetweeners #podcast #completeditmate

Read More: Simon Cowell hits back at claims he’s had a gastric band after weight loss

“The reason why I wasn’t comfortable talking about my anxiety on certain shows is that I thought the whole thing was sort of hypocritical.

“I think they’ve baited people that have probably had mental health problems and used that to make entertainment.”

Although James has been on This Morning before and enjoys watching the programme he doesn’t agree with how they’ve treated guests struggling with mental illness in the past, in particular bipolar sufferer Kerry’s now infamous 2008 interview in which she appeared slurring and disoriented.

The 32-year-old actor added: “Whatever you’ve got to say about Kerry Katona, for example, she’s obviously got some demons, and they roll that clip out at every opportunity.

I didn’t even see that live but I’ve seen it repeated on TV numerous times and that’s not fair.

Having such a lovely time with all my mates drinking in the sun. Hope you’re all having fun!

Read More: Ant McPartlin returns to Twitter to give a glimpse into his family life

“I don’t want to see anyone taken advantage of like that. How she got to the point where they were like, ‘Yeah you can go on. You’re fine.’ It’s really, really unfair and it does not help the problem at all.

“To be used like that would be horrific and would make you go even more insane.”

James – who is married to former model Clair Meek with whom he has two sons, Harrison and Jude – does think as attitudes to mental health change and get better that things will change on television too.

He said: “I think things are changing and sometime in the near future there would be someone responsible there going, ‘For your own health we can’t have you on live television right now. We want to make you feel better because I’m another human being and I don’t want to see someone else suffer in this way.’

“Instead of just doing the complete opposite and going, ‘Right, this will be some ratings.’ ”