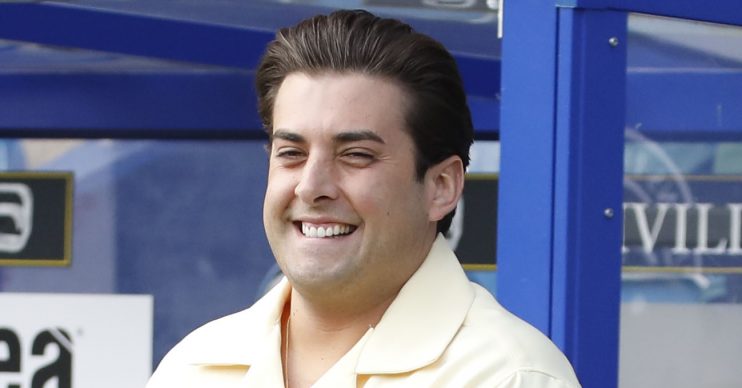 After he revealed that he is worried he may “die” if he doesn’t lose weight, James “Arg” Argent has now been told that he is “morbidly obese”.

The TOWIE star recently revealed that he weighed around 24 stone – the heaviest he’s ever been, after gaining ten stone in just two years.

James is currently in training to swim the English Channel as part of Channel 4’s Sink Or Swim for Stand Up To Cancer.

IVE PASSED THE ASSESSMENT!!! In under 10 days I will be swimming 🏊‍♂️ #theenglishchannel in aid of @su2cuk ❤️ Who believes in me that I’ll complete it!? #SinkOrSwim TONIGHT @channel4 9:30pm!!!

Experts on the show revealed: “He’s morbidly obese. Almost half of his bodyweight is composed of fat and a lot of that fat is around the organs.”

Sports scientist Dr Greg White added that it was “very bad in terms of long-term outcome”.

Arg opened up about his battle with his weight on the show, revealing his fears for his heart after his dad recently had a pacemaker fitted.

He said: “I am a big guy so there is a lot of pressure on the heart. The fact my dad has heart problems, that was a big wake up call for me and I have to be careful.”

The reality TV star recently told The Sun about his charity challenge, which has seen him training alongside Love Island‘s Wes Nelson.

He said he was hoping it would “kick-start” his weight-loss.

Arg added: “The swim is an opportunity to sort my life out. I need to lose about eight stone or more. I’ve got a long way to go even after I swim the Channel. But it’s just a perfect way to kick-start my healthy weight loss.”

And it seems to be working, with The Sun reporting that the star has already shed three stone due to the gruelling training for the show.

He said: “I’m starting to lose weight, and the distance that I’m swimming is getting longer and longer. It’s really been fantastic for me. It’s just come at the right time.”

Viewers threw their support behind the TOWIE star after the show aired, saying they hope he “doesn’t let himself down”.

Serious respect for all these celebrities and what theyre doing for cancer on sink or swim. I hope @MissGeorgiakx is still proud too. That was tough watching and She came so far even if she can’t finish. I hope arg doesn’t let himself down, he could do so well #SinkOrSwim

Arg says he is now on a special meal plan to aid his weight loss, after reports that he had reached out to showbiz pal Tyson Fury for diet and fitness advice.

Let us know what you think of our story on our Facebook page @EntertainmentDaily Fix.