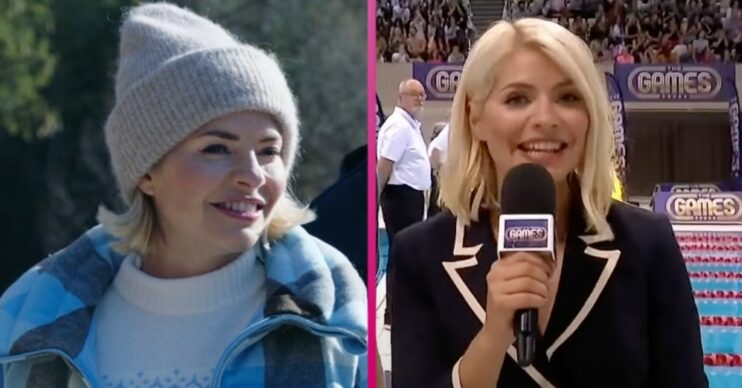 The Games Holly Willoughby was the subject of complaints from both ITV and BBC viewers last night (Tuesday, May 10).

Holly was presenting shows on both BBC and ITV at the same time last night – and some felt as though they couldn’t escape the 41-year-old!

Holly Willoughby on Freeze the Fear and The Games

Viewers of BBC and ITV couldn’t get enough of Holly last night.

From 9pm, the star was presenting the BBC show Freeze the Fear alongside comedian Lee Mack.

Last night’s show saw the celebrities attempt to complete yoga stances on a tiny beam suspended over a waterfall, as well as swim under a frozen lake.

If viewers turned over to ITV they would then have seen even more of Holly!

She was also hosting The Games alongside Freddie Flintoff last night. Unlike Freeze the Fear, however, The Games is broadcast live.

Not everyone seemed to be happy to see Holly popping up everywhere last night.

Plenty of BBC and ITV viewers took to Twitter to air their thoughts on Holly’s domination of telly yesterday.

“Anyone else a bit fed up of Holly Willoughby on TV all the time? Are there no other female presenters??!!” one viewer asked.

“#FreezeTheFear & #TheGames so that’s Holly Willoughby on BBC and ITV at the same time, I don’t know about anyone else but I’m sick of seeing her on nearly every show and also the ads!!!” another ranted.

“Holly Willoughby is currently on both BBC and ITV at the same time. I don’t mind her but FFS can’t someone else have a go,” a third tweeted.

“Just turned off ITV because Holly Willoughby is on AGAIN – and she is on BBC One as well, at the same prime-time TV. Producers or casting directors come on?? Give us a break, thank god for Netflix tonight,” another said.

Viewers of both Freeze the Fear and The Games have been divided over the fact that Holly is hosting. The Games viewers’ main complaint is that Holly doesn’t have any sporting experience – something the other presenters do.

“Why is Holly presenting this instead of Oti Mabuse/Kirsty Gallacher/Gabby Logan etc. Everyone else has a sports connection,” one viewer tweeted.

Freeze the Fear viewers had a different complaint – that Holly (and co-host Lee Mack) had little point being there.

“I love Holly and Lee but not sure we need them,” one viewer said.

“The links with Holly and Lee feel really unnecessary and misjudged on #FreezeTheFear,” another wrote.

However, not everyone was unhappy that Holly got the gigs.

“The #BBC series #FreezeTheFear with #wimhof is proving to be a great watch and also showing what a terrific double-act Holly Willoughby and Lee Mack make as presenters,” one Freeze the Fear viewer said.

“Holly and Freddie have great chemistry,” a viewer of The Games wrote too.

The Games continues tonight on ITV and ITV Hub at 9pm.

Freeze the Fear continues on Tuesday, May 17 at 9pm on BBC One and BBC iPlayer

What did you make of Holly being on BBC and ITV last night? Head to our Facebook page @EntertainmentDailyFix and let us know.