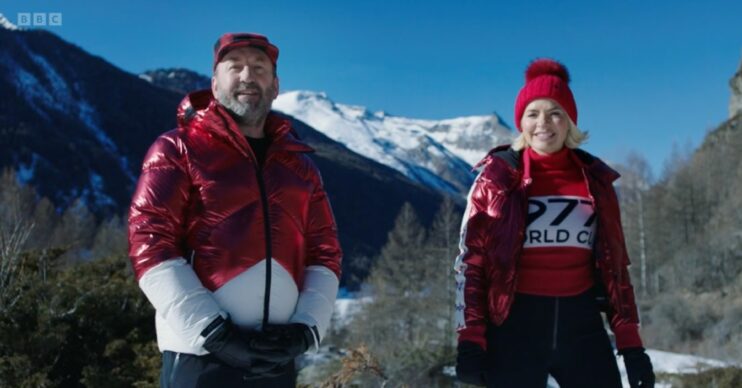 The BBC show returned last night for another episode!

After three episodes, viewers are starting to wonder whether the presenting duo are needed on the show at all!

Last night saw the third episode of Freeze the Fear air on BBC One.

Plenty happened during last night’s episode. The celebrities met Wim Hof‘s daughter, and Patrice Evra and Professor Green opened up about past traumas.

Elsewhere in the emotional episode, the celebrities took part in a chilling challenge.

They were forced to go up against a powerful, man-made blizzard – in just their swimwear!

However, despite all the excitement, some viewers had a few complaints to make.

Holly Willoughby on Freeze the Fear

Some viewers of the show took to Twitter yesterday to ask whether there was any need for Holly and Lee to be on the show at all.

“I love Holly and Lee but not sure we need them,” one viewer said.

“The links with Holly and Lee feel really unnecessary and misjudged on #FreezeTheFear – especially when the others are sharing such intimate past traumas,” another wrote.

“What is the point of Lee Mack on #FreezeTheFear?” a third asked.

“Lee #wimhoff is not funny & a pretty appalling co-presenter,” another said.

However, not everyone thinks Holly and Lee are surpulous to requirements.

“The #BBC series #FreezeTheFear with #wimhof is proving to be a great watch and also showing what a terrific double-act Holly Willoughby and Lee Mack make as presenters,” one viewer said.

It seems as though viewers are still divided over whether or not Freeze the Fear is worth watching!

Some are still very unimpressed with the new BBC show.

“Does anyone actually give a flying [bleep] about #FreezeTheFear?” one viewer asked.

“What a totally pointless television programme. #FreezeTheFear Can see no logical reason for it being allowed to continue,” another said.

However, others were enjoying what the programme had to offer.

“Loving #FreezeTheFear with Wim Hof. The celebrities are getting along well and the challenges are insane,” one viewer said.

“I am loving #FreezeTheFear tonight’s episode had me crying and laughing in equal measure brilliant stuff,” another tweeted.

Freeze the Fear continues Tuesday, May 3 on BBC One and BBC iPlayer at 9pm.