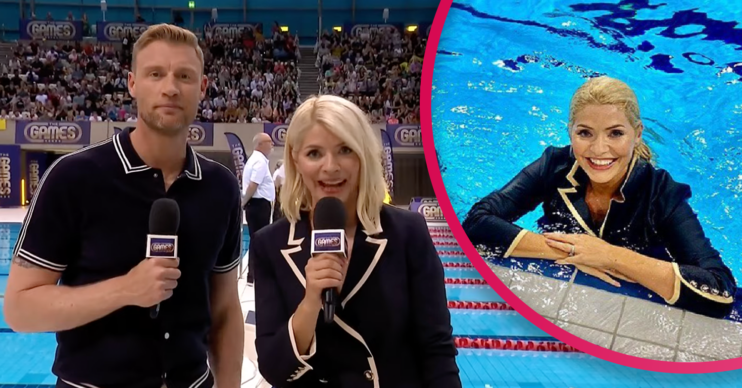 The Games: Holly Willoughby SOAKED as she jumps in the pool fully clothed

That suit's ruined then...

Holly Willoughby flashed her legs in a shorts suit before jumping into the pool fully clothed during last night’s edition of The Games (May 10).

The 41-year-old and her co-star, Freddie Flintoff, threw caution to the wind at the end of the second episode of the show by getting soaked in the pool.

Holly Willoughby jumps into pool on The Games

Holly gave her fans another look at hers and Freddie’s jump into a swimming pool on her Instagram last night.

The This Morning star was wearing a stunning shorts suit when she took the plunge with Freddie.

Holly was wearing a pair of navy Karen Millen shorts that showed off her legs on last night’s show.

She paired the shorts with a matching blazer and completed the look with a pair of nude heels.

The star uploaded a picture of her outfit to Instagram, as well as a Boomerang of herself and Freddie jumping in the pool.

“And that’s a wrap on tonight’s episode of @thegamestv … always a pleasure @aflintoff11,” she captioned the short video.

“Noooo….the jacket will be ruined! Feel free to send my way!!” one follower wrote.

“Cries in Dry Clean Only,” another said.

“How could you in that suit,” a third commented.

Other fans were keen for Holly to know how much they were enjoying the show.

“Loving The Games,” one follower said.

“Loving the games and loving watching the presenting. Holly you are a real star and loving your partnership with Freddie,” another wrote.

“Brilliant! Loving the show so far,” a third said.

The fact that Holly is hosting the Games has proven to be a pretty controversial decision amongst some viewers.

Some fans of the show have been left baffled as to why she is hosting the show, especially considering that she has no prior sporting experience.

“No surprise Holly’s presenting it either, gets where [bleeping] sand can’t, absolutely no connection to sport whatsoever either,” one viewer tweeted on Monday night (May 9).

“Holly Willoughby admits she knows nothing about sport, so she gets the gig presenting #TheGames. Next up, Joey Essex chairing University Challenge,” another said.

However, some were happy to see Holly hosting the show.

“Holly and Freddie have great chemistry,” one viewer said.