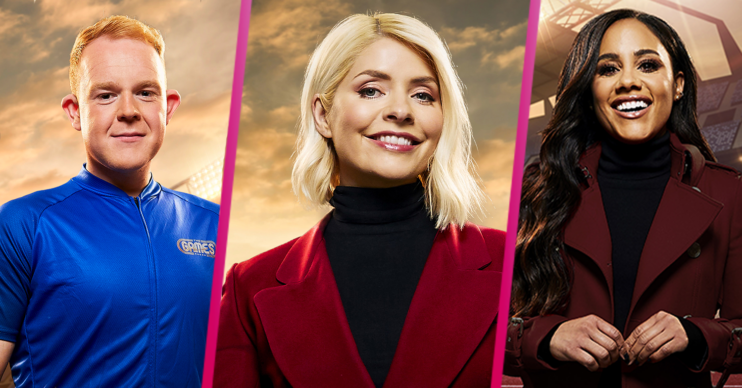 The Games on ITV: Who are the contestants, what challenges are there and how many episodes?

Holly Willoughby takes the helm of the new reality show

The Games is a brand-new ITV reality series that’ll see celebrity contestants do battle for a gold medal – and we reckon it’s set to take the nation by storm.

It features six female and six male celebrities who are pitted against each other in a test of strength and endurance.

The show originally aired on Channel 4 for four seasons between 2003 and 2006. At the time, it was hosted by Jamie Theakstone.

However, it’s now been revived by ITV and it starts tonight (May 9).

Here’s everything you need to know about the new series.

Who is hosting The Games on ITV?

The Games is being hosted by This Morning star Holly Willoughby and cricketer Freddie Flintoff.

Meanwhile, ex-professional footballer Alex Scott is the show’s trackside reporter and presenter Chris Kamara will be this year’s commentator.

Which celebrity contestants are taking part in The Games on ITV?

There are an array of famous faces taking part in the show this year.

Love Island star Chloe Burrows and TV presenter Will Njobvu are the reserves and will step in if anyone becomes injured – or if Lucy Mecklenburgh goes into labour and Ryan has to dash off!

What challenges will the celebrities face?

The stars will be thrown into the athletics arena, before being made to take each other on in the swimming pool.

There will also be gymnastics challenges and races in the velodrome.

Read more: Holly Willoughby mocked over dress on This Morning

Events will include the 100-metre sprint, diving and races that will allow the celebs to build up points on the medals table.

As a result, at the end of the series after numerous events, a male and female winner will be crowned.

What can we expect from tonight’s show?

Holly and Freddie will be live from Crystal Palace and Alex Scott is trackside for the opening night of The Games as 12 celebrities take on the sporting challenge of a lifetime.

Tonight’s action – which airs over 90 minutes – sees the women go head-to-head in the hurdles race.

The men, meanwhile, do battle in the hammer and 400m race.

It’s also a chance to see the first round of the mixed synchronised diving.

How many episodes of The Games on ITV are there?

The Games will be a week-long event.

The five-part series will continue live nightly throughout the week. As a result, Holly will be absent from her presenting role on This Morning for the duration.

Originally called The Real Games, the show was first announced back in December 2020.

It had been due to air in 2021 but was delayed due to the global pandemic.

Viewers can start watching the show when The Games begins on Monday, May 9 at 9pm on ITV. Elsewhere, episodes will also be available on ITV Hub.

Meanwhile, will you watch The Games on ITV? Leave us a comment on our Facebook page @EntertainmentDailyFix and let us know.