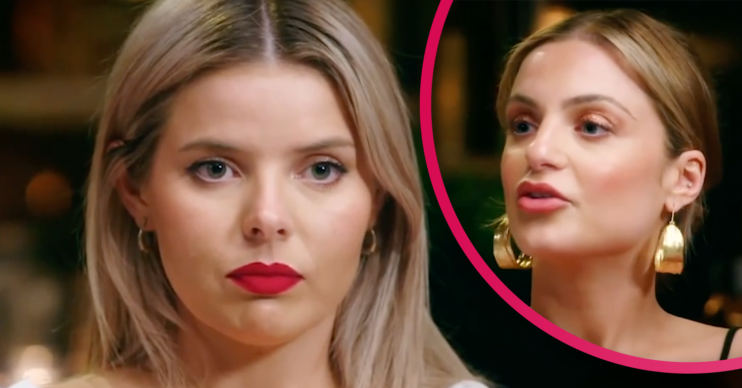 MAFS Australia’s Olivia Frazer has revealed she lost her job after a naked photo scandal hit the show.

Olivia has been dubbed this season’s “villain” and declared she’s “more hated than Putin” after appearing on the series.

Why is Olivia so disliked on MAFS Australia?

She reportedly got pals to “dig up dirt” on fellow MAFS Australia star Domenica.

This resulted in the discovery of a nude photo she had posted on Twitter on January 2, 2021.

Dom had shared the image on her public Twitter profile to promote her OnlyFans account, which has since been deleted.

The photo quickly spread through the MAFS cast via WhatsApp, and was addressed at the first dinner party following the couples’ retreat.

Domenica was humiliated to learn her co-stars knew about her OnlyFans account and had seen her naked.

As a result, she broke down in tears.

During the reunion episode which just aired in Australia, it emerged that Olivia still hasn’t apologised to Domenica.

And she said she won’t be saying sorry any time soon.

In fact, she revealed that she has lost her job as a result of the furore surrounding the naked photo scandal.

What did Olivia say about the naked photo scandal?

Olivia spoke to the No Filter podcast this week.

She alleged that she was spurred on to say she had “no empathy” for Domenica over what had happened.

And she claimed that what she actually said was edited for the broadcast.

People compare me to Ted Bundy, and I’m a psychopath.

She then alleged: “They cut it to: ‘I don’t have empathy.’

“People compare me to Ted Bundy, and I’m a psychopath,” she added.

Olivia said she didn’t feel like she was “outing” Dominica as an OnlyFans model.

She claimed on the podcast: “I mentioned [the nude image] to my producer who didn’t think it was a big deal either.

“I was just really blindsided by production because they were putting words in my mouth and saying I did it out of revenge.”

ED! has contacted Channel 4 for a comment on this story.