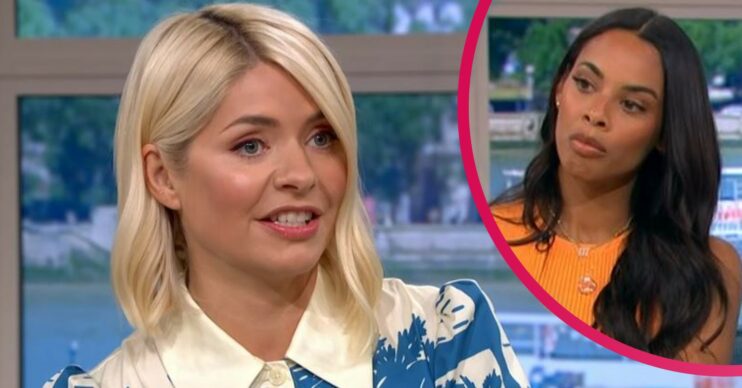 Holly is hosting The Games all week

Holly Willoughby has revealed she’ll be off This Morning all week as she hosts a different show.

The presenter, 41, is hosting ITV’s The Games with Freddie Flintoff this week which means she won’t be on the daytime show.

On Instagram on Monday, Holly announced she’ll miss her “This Morning family”.

Why isn’t Holly Willoughby on This Morning?

Holly will be hosting The Games this week, as she said on Instagram: “Morning… going to miss my @thismorning family this week however I’ve had a change of career and become a Cheer Leader…

Read more: Holly Willoughby mocked over dress on This Morning

“It was only a matter of time @thegamestv.”

On This Morning today, her co-star Phillip Schofield opened the show with Rochelle Humes.

“It’s live tonight and all week. We’ll be talking about that a bit later on. At 9 o’clock tonight, she’ll be live… not taking part, actually hosting it beautifully.”

Fans were gutted over the news as one commented on Holly’s Instagram post: “Gonna miss you this week! Have a great time filming The Games though.”

Another said: “You’re definitely gonna be missed on This Morning this week,” followed by sad face emojis.

Meanwhile, a third wrote: “You will be missed.”

On Sunday, Holly shared a photo of herself and Freddie as they got ready for The Games.

She wrote: “Join me and @aflintoff11 tomorrow night on @itv 9pm for @thegamestv…

Fans are looking forward to the show as one excitedly said: “I’m excited to watch, can’t wait!!”

Another added: “Cant wait to see this show.”

A third wrote: “Good luck Holly and Fred on your new show can’t wait to see you both working together.”

Will you miss Holly on This Morning? Leave us a comment on our Facebook page @EntertainmentDailyFix and let us know.