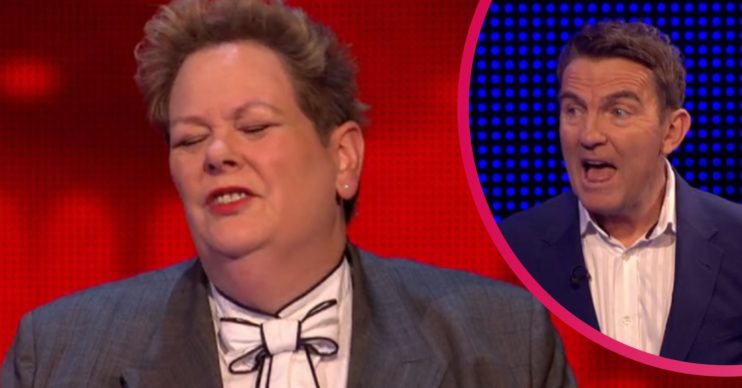 The Chase: Anne Hegerty ‘struggles’ through ‘tricky’ final round

She thought both sets of questions were tough

Fans of The Chase thoughts quizzer Anne Hegerty appeared to be ‘struggling’ during last night’s episode.

In Wednesday (July 8) evening’s repeat, two contestants made it to the final round to take on The Governess and play for a prize pot of £7,000.

What happened on last night’s episode of The Chase?

They set up a score of just 12 for Anne to beat.

Host Bradley Walsh observed: “I’ve got to say, for a final chase those were tough questions.”

Anne agreed: “Those were some tricky questions, certainly not in my comfort zone.”

When Anne started on her questions, the first initially left her stumped.

Brad asked: “What number out of 10 is said to be a complete success?”

Anne looked like she had no idea and ventured, incorrectly: “One?”

Realising her error, The Governess explained: “Oh! Sorry I didn’t understand the question.”

The contestants then answered correctly with ’10’, and Anne again said: “Sorry!”

As the final chase went on, viewers thought Anne appeared to struggle with some of the answers, even those she got correct. But in the end she caught the team of two with an impressive 29 seconds to spare.

She said afterwards, looking relieved: “Two really quite tricky sets. I’m relieved not to have slipped up violently on that.”

Reacting to the episode on Twitter, one viewer called it a “debacle” and others said they thought Anne wasn’t on her usual top form.

One said: “Anne struggled there with some really hard questions… #thechase.”

Another put: “#TheChase Anne only in 3rd gear but much too good for these two.”

A third tweeted: “Phew! Anne seemed to be struggling a bit. #thechase.”

“The contestants’ idiocy seems to have infected Anne #thechase,” someone else said.

“Well thank [bleep] that debacle is over,” wrote a fifth.

Anne struggled there with some really hard questions….. #thechase

Phew!! Anne seemed to be struggling a bit. #thechase

The contestants idiocy seems to have infected Anne #thechase

Last week, Anne revealed on Twitter that she has been on something of a “sabbatical” while The Chase takes a break from filming during lockdown.

A few weeks ago she uploaded a selfie that showed her wearing a face mask to protect against coronavirus. She wrote in the caption: “I have masks!”

Read more: The Chase: Viewers say Shaun Wallace has ‘redeemed’ himself after ‘amazing’ final round

More recently, one of her followers commented on the snap: “Knew you would be wearing one Anne, lol.”

Anne joked, “I got recognised in Tesco yesterday even with mask on!” and when the social media user asked if she was on furlough, she told them: “Me? Not furloughed, just having a bit of a sabbatical.”