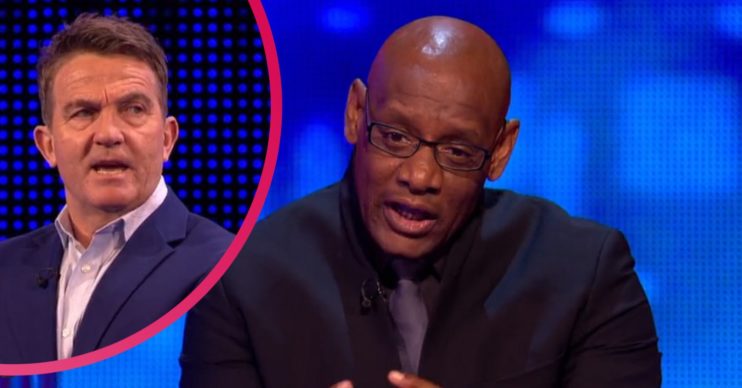 The Chase: Viewers say Shaun Wallace has ‘redeemed’ himself after ‘amazing’ final round

Fans of The Chase have had to admit that quizzer Shaun Wallace has well and truly ‘redeemed’ himself after putting in a blistering performance.

Viewers have previously called for The Dark Destroyer to be replaced on the hit ITV game show.

What happened with Shaun on The Chase?

But during Monday (July 7) night’s repeat episode, the naysayers were silenced as Shaun, 60, delivered a “truly amazing” final chase to deny the team their prize.

All four contestants made it to the last round and set up 19 for him to beat.

Trying to predict the outcome, one viewer said: “#TheChase Shaun [is] in big trouble, [he] struggles with 15 let alone 19.”

“19, pretty good although since it’s Shaun, upgrade that to ‘excellent’! #TheChase,” said another.

“#TheChase 19 is okay against Shaun,” someone else tweeted.

19 – pretty good although since it's Shaun, upgrade that to 'excellent'! #TheChase

#TheChase 19 is ok against Shaun

But Shaun ended up catching the team – which had four opportunities to push back but only executed two – with a few seconds remaining.

Afterwards, viewers rushed to Twitter to heap praise on Shaun.

How did viewers react to Shaun’s win?

One said simply, “[Well] played, Shaun” with a clapping emoji.

A third put: “I like when Shaun wins just to hear him say, ‘It’s just another day at the office’ #TheChase.”

Someone else echoed that, tweeting: “‘It’s just another day in the office’. Well done, Shaun #TheChase.”

A fifth, who had previously predicted Shaun would redeem himself, said excitedly: “And Shaun did it!”

“That was a redemption and a half, Shaun!” commended a sixth, adding: “Well chased indeed!”

Its just another day in the office.. well done Shaun 👏 #TheChase

After his win, host Bradley Walsh said: “Wow, great rhythm at the end, I’ve got to say. Very good.”

Shaun told Bradders: “That was one of the best teams I’ve ever come up against. They were absolutely superb. They dovetailed together well. They were brilliant. But at the end of the day, Bradley, it’s just another day at the office.”

The Breaking Dad host then joked: “I wouldn’t want to spend to many days at his office! Too much stress.”