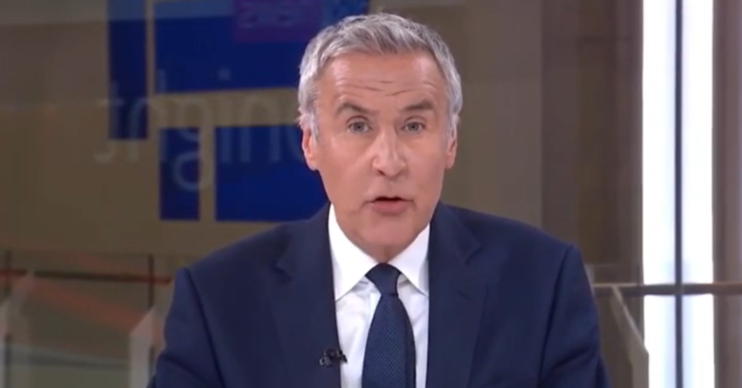 Sky News made a rather big mistake last night when Dermot Murnaghan was reading out the headlines.

As Dermot introduced Monday night’s news bulletin (June 8) at 8pm, he said: “The top story: ‘We have actual evidence Madeleine McCann is dead’, German prosecuters reveal more on their investigation into the suspect, Christian B.

“We’ll bring you the latest on the investigation throughout the programme.”

The picture didn’t match the story on Sky News

But while the headline was straightforward, as Dermot was talking the channel showed a video clip of Prince Andrew.

The camera returned to Dermot after the clip and although he seemed a little uncomfortable, he continued professionally.

Sky News did, in fact, apologise for the blunder, with Dermot saying moments later: “Now in the headlines at the start of this hour, we featured headlines in the wrong order.

“We included a picture of Prince Andrew in the headline about the investigation into Christian B, the German suspect in the Madeleine McCann case.

“We apologise for this mistake.”

People watching at home picked up on the mix-up and immediately called Sky News out on it.

“Horrific VT [bleep] up from Sky News as they accidentally run a clip of Prince Andrew over a headline about the suspect in the Madeleine McCann case.”

Someone else added: “Sorry, who’s actually going to believe that was just a little oops.”

There was one more who wrote: “The awkward moment when Sky News run story about Madeleine McCann and the peadophile involved, but ‘accidentally’ show picture of Prince Andrew.”

“Sky News has just apologised for mistakenly showing a picture of Prince Andrew instead of the German suspect in an item about the Madeleine McCann case. Ooops,” said a fourth.

A further user added: “HAHAHAHAHAHAHAHA! This is much better than when they accidentally said Kirk Douglas was the father of Michael Jackson.”

Someone else picked up on Dermot’s uncomfortable look: “Dermot Murnaghan’s face afterwards is, as they say, a picture,” they joked.

Why is Prince Andrew in the news?

American prosecuters want to speak to Prince Andrew over his friendship with convicted paedophile Jeffrey Epstein.

The Duke of York has previously refused to speak to them, denying an affliation with Epstein’s sex trafficking network.

But America’s Department of Justice has formerly told the UK Government that Prince Andrew is now wanted for questioning.

Meanwhile, German prosecuters are looking into evidence on the disappearance of Madeleine McCann 13 years ago.

They have a suspect in mind, German paedophile Christian B, and say they believe they have evidence that confirms she is dead.

Madeleine was almost four when she went missing from her holiday apartment in Portgual in 2007.