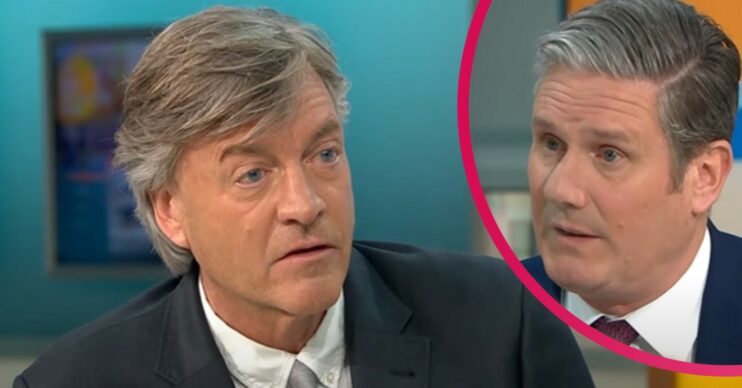 Richard Madeley mocked by GMB viewers for remark to Keir Starmer: ‘Get him off!’

GMB fans cringed this morning after Richard Madeley made an awkward remark to Keir Starmer.

The 65-year-old was grilling the Labour leader about reports he had broken the lockdown rules.

Footage of Mr Starmer drinking beer with colleagues in April 2021 has emerged and Richard jumped straight in with a zinger.

Labour leader Sir @Keir_Starmer is challenged over pictures showing him drinking beer with colleagues when indoor socialising was banned.

He tells @susannareid100 and @richardm56 that the police have not been in touch with him to investigate the ‘beergate’ claims. pic.twitter.com/Ar5lhkk8ya

He quipped: “Let’s cut to the chase. What do you say to the fact that evidence seems to be emerging that there were about 30 people takeaway meals, and bottles of beer and social intercourse that went on, did that happen?”

One person shared a meme of the fictional character and wrote: “Social intercourse” alongside Alan’s favourite expression: “AHA!”

Another tweeted: “I’m off to work for my daily dose of social intercourse.”

Meanwhile, a third was really irritated by Richard and fumed: “Did @richardm56 just say #socialintercourse? WHAT! Get him off now! #GMB”

It’s not the first time Richard has angered viewers of the show.

Last month, he sparked Ofcom complaints over comments he made to a guest.

The presenter interviewed an oil protestor and branded their slogan “childish” and “very Vicky Pollard”.

According to The Sun, TV watchdog Ofcom received 59 complaints relating to the interview.

The seasoned presenter is now a regular on GMB after Piers Morgan left the show after the Meghan Markle debacle.

Piers also courts controversy and is making plenty of headlines on his new Uncensored show.

I’m off to work for my daily dose of social intercourse.

In the first week he interviewed Donald Trump, Sharon Osbourne and Tyson Fury.

We wonder what Richard thought of his technique!

What do you think of Richard Madeley on GMB? Head to our Facebook page @EntertainmentDailyFix and tell us.