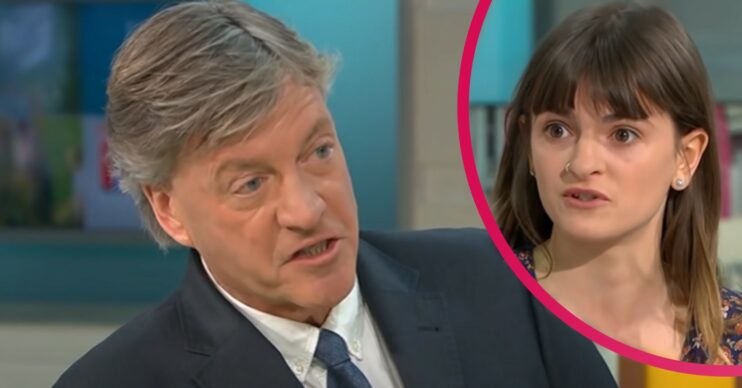 The interview took place on Monday

GMB host Richard Madeley has sparked Ofcom complaints over comments he made to a guest on the show.

On Monday, the presenter interviewed an oil protestor as he branded their slogan “childish” and “very Vicky Pollard”.

Just Stop Oil activist Miranda Whelehan had appeared on the programme on Monday to discuss whether oil protests are justified.

During the interview, Richard took aim at the group’s slogan.

Richard added: “Just Stop Oil? I mean, come on there’s more to say than that, isn’t there?”

However, Miranda replied: “I would say that the answers are actually very simple. We need to stop new oil licensing and that’s what we’re asking.”

But Richard continued the debate, bringing up Miranda’s clothing.

He said: “You talk about democracy but lets talk about hypocrisy. The clothes that you’re wearing to some extent owe their existance to oil.

“There are so many ways oil impacts on your life as a protestor but you don’t acknowledge that.”

According to The Sun, TV watchdog Ofcom received 59 complaints relating to the interview.

On Monday, viewers weren’t happy with the debate and criticised Richard on Twitter.

One person tweeted: “Can you please register this tweet as a formal complaint.

“This interview was not journalism, it was an attack on a young woman who eloquently put her view forward.”

Another added: “This ‘interview’ by the increasingly dreadful Richard Madeley is beyond patronising.”

A third wrote: “Absolutely disgusted with Richard Madeley’s patronising attitude towards a young woman raising concerns about the climate emergency.”

He said: “The protest, whether you agree with them or not, got the eloquent young woman on to national television to talk about the likely catastrophe.

“Madeley is deeply patronising and dismissive of someone who understands their future is in grave danger.”