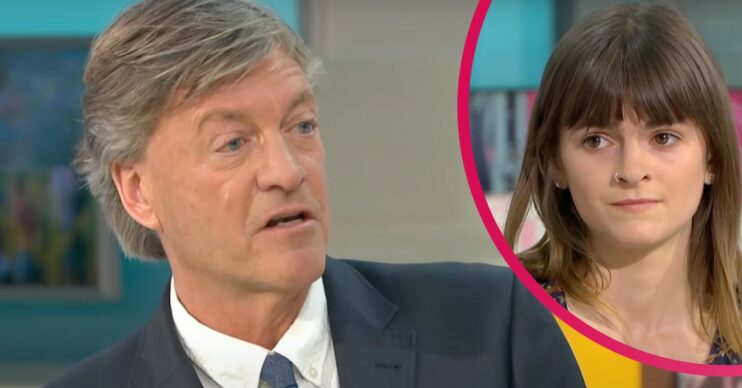 Good Morning Britain host Richard Madeley has come under fire for a “rude” remark he made to a guest on today’s show (Monday, April 11).

The 65-year-old was interviewing an oil protestor on the show today when he branded their slogan as ‘childish’ and “very Vicky Pollard”.

Richard and his co-host, Ranvir Singh, hosted a heated debate about oil protests on today’s edition of the show.

The duo welcomed Miranda Whelehan, an oil protestor, onto the show to discuss why she feels the need to protest.

Miranda is part of the Just Stop Oil activist group. Over the weekend, the group’s protests, by blocking oil tankers, led to one in three petrol stations being forced to close.

Read more: Stephen Mulhern on real reason he didn’t go on a ‘date in four years’

“But at the same time they deeply resent having their personal lives massively interrupted by the actions of people like you,” he continued.

“Do you accept that you’re possibly alienating people who, in a general sense, would support your background cause?” he asked.

Miranda replied saying that none of the protestors want to be disrupting anyone’s lives. However, she said that this is the level of action that needs to be taken when the government is “failing on their energy policies” and “climate pledges”.

“But you’d accept wouldn’t you that it’s a very complicated discussion to be had?” Richard asked.

“Just Stop Oil? I mean, come on there’s more to say than that, isn’t there?” Richard said. A shocked Miranda laughed, before replying.

“I would say that the answers are actually very simple. We need to stop new oil licensing and that’s what we’re asking,” she said.

Richard revealed that there hadn’t been a single message of support from viewers for the Just Stop Oil protests.

Viewers may not have had much support for the oil protestors. However, they were furious at Richard for his behaviour in the interview. Many branded the 65-year-0ld “rude” and “patronising”.

“Can you please register this tweet as a formal complaint. This interview was not journalism, it was an attack on a young woman who eloquently put her view forward. What a horrible experience to watch,” one viewer tweeted.

Read more: 365 Days on Netflix: Are they REALLY having sex and when can we get our season 2 fix?

“This ‘interview’ by the increasingly dreadful Richard Madeley is beyond patronising. Whether we agree with the points this lady is making or not, she deserves to be treated with respect and not talked down to like she’s five years old,” another said.

The protest, whether you agree with them or not, got the eloquent young woman on to national television to talk about the likely catastrophe. Madely is deeply patronising and dismissive of someone who understands their future is in grave danger. Desperate times and all that…. https://t.co/KSllY16ojH

“He is patronising without any qualification to be so,” a third wrote.

Even ex-footballer Gary Lineker got involved in the discourse, branding Richard “deeply patronising” following the interview.

Meanwhile, others appeared to defend Richard with one person saying: “I fully support the young woman, but the interviewer had to reflect on the opposing views, that’s his job.”

Good Morning Britain airs from 6am on weekdays on ITV and ITV Hub.