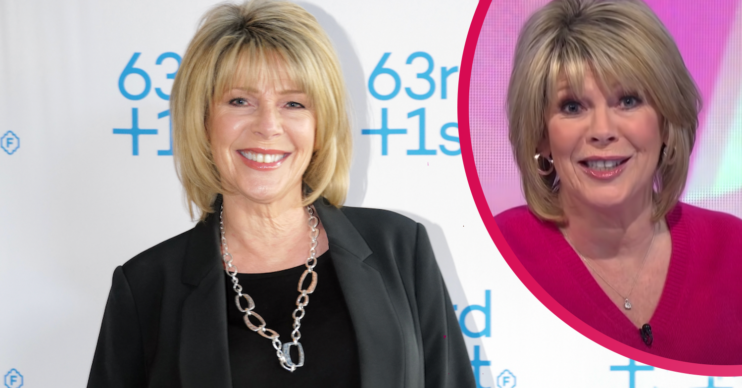 It's really rather sweet!

Ruth Langsford, 61, is currently the longest-serving presenter of ITV’s award-winning show This Morning.

She also regularly breaks up squabbles as host of Loose Women and is part of a TV power couple with husband, Eamonn Holmes.

Ruth and Eamonn have been together for a staggering 25 years, but kept their relationship quiet several of those. What was the reason behind the secrecy?

How did This Morning stars Ruth Langsford and Eamonn Holmes meet?

According to legend (tabloid reports) Eamonn Holmes was introduced to Ruth Langsford in 1995, while he was working as a presenter on GMTV.

They were introduced by mutual friend, TV presenter Sally Meen.

At the time, Eamonn was still married to his first wife Gabrielle Holmes, although the pair were separated.

Read more: Loose Women’s Ruth Langsford reveals how she had to cut up bank cards over debt

Did Ruth and Eamonn have an affair?

Despite still being married to Gabrielle when Eamonn met Ruth, the couple didn’t have an affair.

Eamonn had already separated from his wife of 20 years before officially divorcing in 1996.

Eamonn and Gabrielle have three children together – Declan, Rebecca and Niall.

Why did Ruth and Eamonn keep their relationship secret?

Ruth and Eamonn had been secretly dating for two years before they made their relationship official.

They did this out of respect for Gabrielle. Eamonn wanted to treat his new relationship with sensitivity so they kept a low profile when they were starting out.

According to The Mirror, Ruth and Eamonn took care, not attending events together or being seen holding hands.

Ruth spoke out about this later, saying Eamonn’s sensitivity towards his ex-wife and children made her fall in love with him more.

Speaking to the Daily Mail in 2017, she said: “I thought it spoke volumes about the sort of man he was, the sort of father he was and the integrity he had. It made me love him more, not less.”

When did Ruth and Eamonn marry?

She previously spoke out about her surprise at his proposal.

During an appearance on Loose Women in 2018, Ruth revealed: “We were at the races in a box with some people and I’d had a few drinks and had won a bit on the horses and was having a lovely time.

“Eamonn had gone out to the loo and when he came back, there were men in the box with us flirting and chatting to me, and he said: ‘I don’t like that them flirting with my wife.’

She went on to say that he composed a beautiful love letter which he sent to her phone as a text message while they were in a car on their way home.

Ruth continued: “I opened it and then there was this beautiful letter. Right at the end it said: ‘Will you marry me?’

“Because we didn’t know this driver I text him back saying: ‘Yes please.’ Then we sat holding hands all the way home and it was really romantic.”

Is Ruth Langsford leaving This Morning?

Ruth and Eamonn had been hosts of This Morning since 2006.

There’s been a lot of speculation about Ruth’s future on the show and she hasn’t made an appearance since Eamonn’s last show in December.

Instead, she’s been busy with her Loose Women hosting duties.

Ruth has appeared on the panel show on and off since 1999.

However, Ruth has said she is still part of the This Morning family.

The star spoke to Best Magazine about her ongoing role.

Ruth told the publication: “I’m still at ITV, with This Morning and Loose Women.”

What else has Ruth Langsford been on?

As well as This Morning and Loose Women, Ruth appeared on Strictly Come Dancing in 2017. She finished in ninth place along with dance-partner Anton Du Beke.

She also voiced the character of Aunt Albertine in 2019 movie, Wonder Park.

Do you love Ruth? Tell us on our Facebook page @EntertainmentDailyFix.