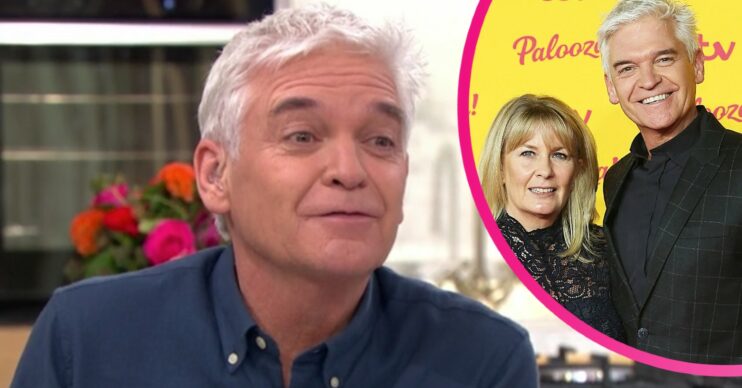 The former couple are rarely seen in public together

Phillip Schofield has spoken about his “perfect night” with former wife Stephanie Lowe, following their public reunion over the weekend.

The pair made a rare appearance as they watched Adele’s special concert in London on Saturday night (November 6).

Following the event, Phillip opened up on their evening together on This Morning.

He said: “She [Adele] was on full form! She was very emotional when she came out – it genuinely terrifies her!

“I can’t say what she said when she came out, but it’s been widely reported that it starts with S.

“She was very nervous, but it’s really such a shame because she’s so extraordinary.”

Holly added: “You got to meet one of your favourite people…”

Phil, 59, responded: “I couldn’t believe it! As if it wasn’t a perfect night as it was, then I was sitting in front of Catherine O’Hara. I’m such a massive Schitt’s Creek fan.”

During the night, Phillip and Stephanie were pictured travelling in a car together.

They also posed for snaps on the red carpet, which marked their first showbiz outing together in nearly four years.

Despite their marriage split, it appears the pair are still on good terms.

Phillip and Stephanie split after the presenter came out as gay.

The ITV favourite has since moved out of the couple’s martial home.

Over the course of their marriage, the two welcomed daughters Molly, 27, and Ruby, 24.

Back in March 2021, Phil revealed he and Steph were still married.

Speaking on Chris Evans’ podcast, he explained: “I’m still married to Steph. There is a great deal of talk of divorce – we have not discussed that at all.

Meanwhile, Phillip also shared the moment he came out to Steph’s parents.

“So I was cleaning a surface at Christmas, wiping it down and Jill, my wonderful mother-in-law, said, ‘You are the perfect man, you know’,” the presenter recalled.

“And I just said, ‘No Jill, no I’m not’, but it was the sweetest thing to say. So yeah, big support from them.”