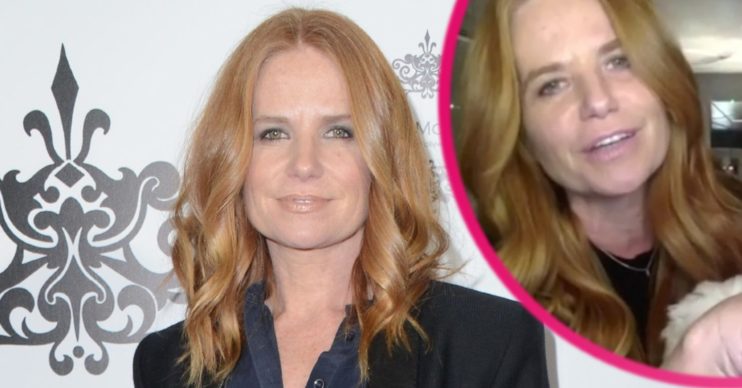 Patsy Palmer on GMB: Actress swears at followers who criticised her for storming off show

The EastEnders star explained why she cut off the interview

The former EastEnders actress took to Instagram to break her silence following her awkward interview with Ben Shephard and Susanna Reid.

During the chat, the 48-year-old star took offence to the show’s strapline: “Patsy Palmer: Addict to Wellness Guru.”

Patsy Palmer on GMB: What did the actress say?

She also took issue to a question about Meghan Markle and Prince Harry.

Shortly after the interview, Patsy shared her reason for leaving the show so abruptly.

Taking to the comments section, she explained: “My apologies to anyone that wants to hear good news as I have great faith that considering what is going on in the world right now, there are some people that do.

“I keep seeing people saying ‘Get over yourself’. I have gotten over my old self years ago and no longer wish to discuss it when I only have 5 minutes of air time.”

Referring to the question about Harry and Meghan, Patsy added: “I’m not a journalist so I don’t want to report on other peoples lives on TV. I never have and I never will, let’s leave that up to the journalists.

“I am not going to waste those five minutes talking about things that are 20 years old or about Meghan and Harry. If I post things on social media in reaction to a TV show or an article I’ve read about something that’s my platform.”

Patsy fires back at ‘trolls’

In addition, Patsy said: “I was supposed to be on there to talk about my new business that I have created and couldn’t be more opposed to that headline. For all the trolls and haters and people on here judging me go [bleep] yourselves.

“I’ve worked really hard on myself to remove negativity from my life and the lives of my children. If anyone has a problem with that, you need to go and take a look at your lives and wonder what drives you to jump on here to attack me for standing my ground.

“If you are parents doing that then shame on you. I hope you find some joy amidst all the madness.”

Furthermore, Patsy addressed the situation on her Instagram Story.

“Thank you for all of your kind words. Hopefully you will all start living your best lives from now on, not from then now.”

During today’s show, Patsy cut her interview short after her past struggles were mentioned.

“So I am just going to switch off, do a real Piers Morgan, and say it’s not okay to have ‘addict to wellness guru’ on the bottom of the screen.”

At the time, Ben went on to explain “addict to wellness guru” was a quote from her book.

She lives there with her husband Richard, and their children, Fenton, 20, Emilia, 19, and nine-year-old Bertie.