Former EastEnders star Patsy Palmer has been spinning the decks live from her Malibu home.

Patsy, 47, has become a keen DJ since moving Stateside and is now using her skills to raise cash for charity.

The actress, who played Bianca Jackson in EastEnders, held her own disco on Friday night in her living room. While wearing a stylish blue mask, Patsy pumped out tunes including California Love by Tupac.

She also turned out the main lights and set up a disco ball and green laser above her sound system.

Sharing some footage on Instagram, Patsy said: "Behind the scenes .... at the disco...Living room ... #stayhome #charity."

The mum-of-three added that she was raising money for the NHS, Mind and Global Giving Worldwide amid the coronavirus pandemic.

Commenting, one fan wrote: "Amazing set! This is the best."

Another told Patsy: "I've only just started following you and can't believe this is the young woman who played Bianca. 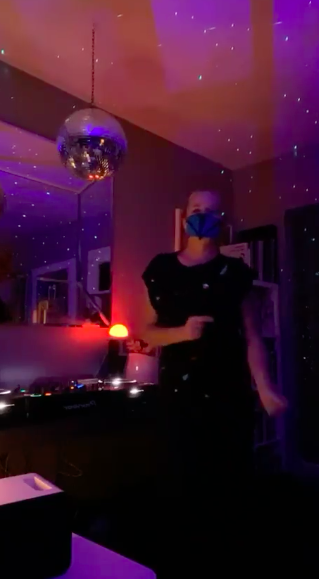 Patsy had a boogie while spinning the decks (Credit: Instagram/ @patsypalmerofficial)

"You're such a talented actress, and now i see you've got another talent. Love it."

Patsy moved to the US with her cabbie husband Richard Merkell and their three children in 2014.

I've only just started following you and can't believe this is the young woman who played Bianca.

The family now live in a beautiful hilltop house with sea views.

She recently shared a photo of her husband and their kids as they relaxed in the garden on a Sunday morning.

She said: "Family time whatever that looks like for anyone can be great at this time .

"People spending time together, teenagers that would not usually be hanging out with parents.

"Little siblings loving having them around. Special times in the midst of crisis. Keep safe everyone. #stayhome #staysafe #sundaymornings."

At the beginning of this year, Patsy returned to the UK to appear on ITV1's The Masked Singer.

Patsy dressed up as The Butterfly and sang You've Got The Love by Florence and the Machine. The actress appeared on The Masked Singer earlier this year (Credit: YouTube/ ITV)

Read more: Holly Willoughby auctions herself off as a lunch date for charity

Sadly for Patsy, she was unmasked and sent home by judges Jonathan Ross, Davina McCall, Rita Ora and Ken Jeong in week one.

She told the panel: "It was really nerve-wracking. You didn't guess my voice so at least I did my job!"