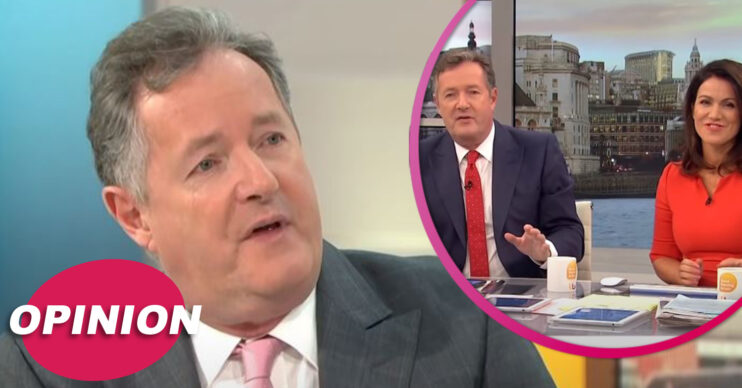 OPINION: GMB bosses should eat humble pie and get Piers Morgan back sharpish

GMB hasn’t been the same without Piers Morgan since he left back in March.

His controversial comments and ability to get people talking has been missed by many in the last few months, including myself.

I miss tuning in on a morning and seeing Piers either holding government ministers accountable or asking the questions we all want answers to.

And I think it’s time Good Morning Britain bosses get Piers back on the programme ASAP.

GMB bosses need to get Piers Morgan back

It’s no secret that Piers often sparked controversy with his remarks on the show.

But that’s what brought in the ratings and even had people who said they ‘hated’ him tuning in to hear what he was going to say next.

While I don’t agree with Piers saying he didn’t believe Meghan Markle in her Oprah Winfrey interview, I do think he should be brought back onto the show as it’s become pretty damn clear no one can come close to filling his giant hole.

Nobody can fill his spot

While they’re all great presenters, none of them hold a candle to Piers.

Often foaming at the mouth with passion and frustration, he brought something unique to the programme and the massive ratings proved that.

In his final days on the show, ratings hit almost two million viewers.

A YouTube clip of Piers’ heated debate with Alex Beresford – in which he walked off set during – has been watched by more than 11 million people.

I think if ITV bosses want GMB ratings to flourish again, they need to have a word with themselves and get Piers back alongside Susanna.

Piers often sparked a divide with his rants on gender, vegans and the ‘cancel culture’.

But he wasn’t afraid to voice his opinion and never sat on the fence, which is all to rare in this world of wokedom.

And let’s not forget how he continued to call out the government throughout the pandemic and held ministers accountable during interviews.

Not many presenters have the balls to do that. I’ve never missed him more than since the whole Matt Hancock affair scandal broke.

Piers would have made mincemeat of him and Boris Johnson for failing to fire him.

You can’t deny he made Good Morning Britain gripping, even if at times buttock-clenchingly so.

So GMB bosses, I think it’s time you eat some humble pie and give Piers his spot back.

Yes, he might be an arrogant ego-maniac and a pain in the proverbial to work with.

But he puts his money where his massive motor-mouth is – and bums on the sofa first thing in the morning.

Read more: Piers Morgan ‘would give both kidneys’ to interview Matt Hancock on affair scandal on GMB

Do you miss Piers on GMB? Leave us a comment on our Facebook page @EntertainmentDailyFix and let us know.