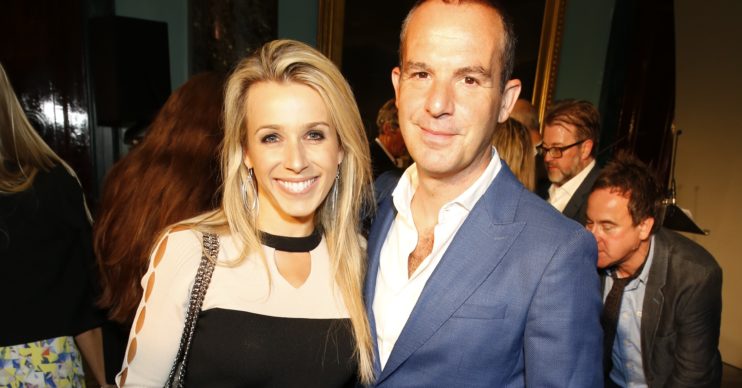 They've been together for 15 years

But the Money Saving Expert has hit back at one fan who seemingly suggested his other half was after his money.

Martin stormed through the show answering as many questions from concerned fans as possible about their financial situations during the coronavirus outbreak.

To observe social distancing measures, Martin was at home and co-host Angellica Bell was presenting from the studio with a skeleton crew.

At the end of the show, he introduced his wife, who had been helping out behind the scenes.

“I want to say thank you to my wonderful wife who’s been helping me here.

“This is Lara, she’s on the telly herself, but she’s been behind the scenes today, helping me.”

Fans loved seeing her on camera and commented on Twitter about her.

“Martin Lewis’s wife is a really stunning woman. I sense a power couple,” shared one.

“Why isn’t Martin Lewis’s wife on his shows more?” questioned a third.

I know you think it’s a joke, but its offensive both to me and my wife.

But one viewer seemingly made a comment too far and Martin felt the need to respond.

In a now-deleted tweet, it appears the user suggested Lara was only with Martin for his money.

Martin soon hit back, defending his relationship: “I know you think it’s a joke, but its offensive both to me and my wife,” he wrote.

“You’re accusing her of being a gold digger.

“We’ve been together for 15 years since way before MSE was owt big. And the mutual support and love we give each other is part of where we both are now.”

I know you think it’s a joke, but actually its offenseive both to me and my wife – you’re accusing her of being a gold digger.

We’ve been together for 15 since way before MSE was owt big. And the mutual support and love we give each other is part of where we both are now. https://t.co/VDphAzopWW

Fans leapt in to defend Martin, with one saying: “Martin you do not have to justify your marriage to lovely Lara to Twitter pond life.”

“Oh Martin! Block them! You’re an amazing human and that’s all that anyone wants in their partner,” said another.

A third added: “Ignore them! They’re jealous! You make a great couple!”

Lara Lewington is a TV presenter and former weather girl.

She and Martin married in May 2009 and she gave birth to their first child in November 2012.

Lara is a reporter on BBC show Click, which covers technology news, and she has revealed she’s also been filming from home!

WFH in our house: @itvMLshow downstairs, @BBCClick upstairs. I know @MartinSLewis has a bigger light, but it’s not a competition. pic.twitter.com/ybYQxALwHT

Martin has been giving invaluable advice to people throughout the coronavirus crisis.

He has admitted that he ‘sits and cries‘ as a result of what has pushed some families to breaking point.

“When someone’s desperate, and it’s someone for whom I don’t have an answer, that’s when I get really upset,” Martin told The Observer.

“I know I’m meant to be the person who can answer questions – but sometimes there isn’t an answer.”

Read more: Dominic Raab warns of five targets that must be met to lift lockdown rules

He also revealed he is donating £1million to help people struggling at this time.