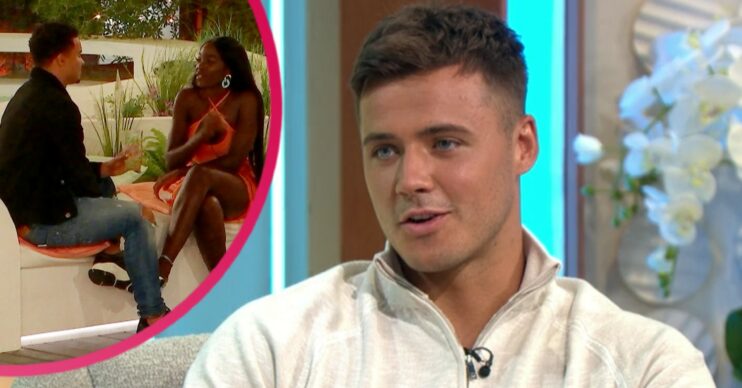 All the latest gossip from the famous villa...

In latest Love Island news, Brad McClelland has revealed he’s reconnected with his long-lost sister since leaving the villa.

During the chat, Brad explained that his sibling reached out after watching him on the show.

Speaking to host Ranvir Singh, the Love Island star shared: “I grew up just with my nana. My dad wasn’t on the scene, but I always knew I had a younger sister.

“I’ve tried to get in contact with her for years, searching social media, trying to find out who she was, I just had her name.”

Brad went on: “She reached out to us and I FaceTimed her for the first time. The first time I’ve seen her face and spoken to her and heard her voice was literally just a couple of days ago.

I now have a relationship with her I can grow from

“I now have a relationship with her I can grow from. So if anything’s to come from my Love Island experience, I found love in a different way.”

Brad was dumped from the villa last week, after hitting it off with Islander Lucinda.

During the dramatic episode, the pair were told that they have to decide between them who would leave.

Speaking about Lucinda today, Brad said: “We just got along so well, everything felt normal, easy-going. I kind of wish there was more time for people to see what we had.

But will Lucinda move on in the villa?

What happens on the show tonight?

Meanwhile, Kaz and Toby come to blows during tonight’s show.

The pair are set for a heated exchange of words after the recent Snog, Marry or Pie challenge.

During the game, Kaz pied Toby after he treated her badly during their time as a couple.

Kaz responds: “You said, if you could do everything again, you’d do it exactly how you did it. I don’t respect that. But that’s just you.”

She continues: “Listen, where you are today is none of my business. I’m happy for you and Chloe to do your thing. However, do I feel like you could have treated me way better? 100%.”

Toby then adds: “Now looking back, now from your point of view I understand. Now you said it.”

Kaz walks away from their conversation, saying: “What the [bleep]? You just said if you could go back, you would do things the exact same way.”

However, the drama continues when other Islanders get involved.