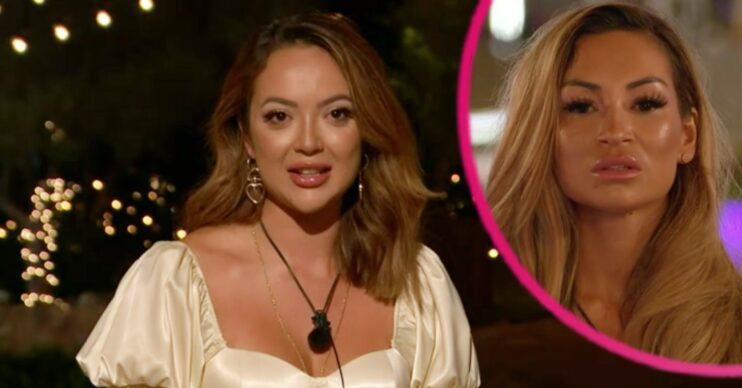 Love Island: Sharon is sent home as bombshell AJ breaks up her friendship couple with Hugo

Love Island star Sharon Gaffka has been dumped from the villa after being coupled up with Hugo Hammond.

The 25-year-old civil servant from Oxford failed to find love on the ITV2 series, despite being coupled up with the PE teacher.

But it was the end of the road for Sharon tonight (July 18).

What happened on Love Island tonight?

Firstly, AJ chose to couple up with Hugo.

She said: “Since coming into the villa, he has made me feel so comfortable.

“He has all the right morals I’m looking for in someone long term, and I would like to explore this and get to know them a bit more, so the boy I would like to couple up with is Hugo.”

Second in line was new boy Danny, who chose to couple up with Lucinda.

Despite setting his sights on Lucinda, Aaron then coupled up with Kaz as friends.

Jake made his choice, choosing Liberty.

Next up was Liam who picked Millie, saying he is “really enjoying where things are going”.

Next up was Toby as he chose Chloe to couple up with.

Teddy was the last man standing.

After hitting it off with Faye, his decision seemed pretty obvious.

As a result, Sharon was sent packing.

However, her fellow Islanders were left devastated.

How did fans react to Sharon’s eviction?

One wrote: “Why are they all acting like Sharon has DIED. She needs to come home and sort out Covid policy anyway pals.”

A second said: “Losing Sharon? She is at home watching the show on the sofa, she hasn’t passed away.”

Why are they all acting like Sharon has DIED!

In addition, a third tweeted: “Why are they all acting like they didn’t know Sharon was the most likely to go?! #LoveIsland.”

However, another commented: “Sharon was amazing in villa. She be hugely missed on the show.”

A second agreed: “Don’t worry Sharon, it’s 30 degrees in your home town and there’s plenty more fish in the sea.”

why is everyone acting as if sharon died help 😭😭😭 #LoveIsland

A third shared: “Cried at Sharon leaving what is wrong with me?”

Meanwhile, some viewers aren’t convinced AJ and Hugo are a match.

They said: “I don’t see anything between Hugo and AJ.”

Another wrote: “I’m sorry the way Hugo is looking at AJ. The man is NOT feeling her.”

A third added: “AJ is pouring her heart out and Hugo is running through the ways he could’ve saved Sharon????”

A fourth agreed: “I can’t decide if AJ just picked Hugo because the other boys were happy in their couples or if she genuinely likes him idk I’m not feeling her vibe.”