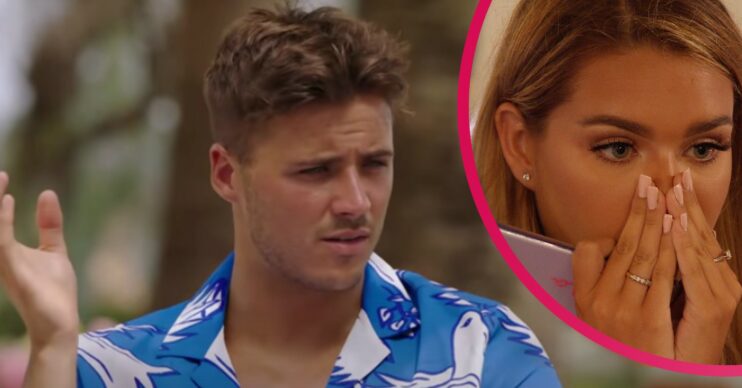 Love Island: Brad dumped from the villa and fans are all saying the same thing

Love Island contestant Brad McClelland has been dumped from the villa and fans are all saying the same thing.

In the show’s first public vote, couples Chloe and Toby, Sharon and Hugo, and Brad and Lucinda were voted the show’s least compatible couples.

However it was Brad and Lucinda that received the lowest votes and were at risk of being dumped from the island.

But in a new twist the couple were told that they have to decide between them who would leave.

In tonight’s episode (Wednesday, July 14) Brad tried to convince Lucinda to stay in the villa.

Lucinda struggled to decide between staying and leaving with Brad.

However they decided that Brad, who has been in the villa since the first day, would be leaving by himself.

Fans were upset to see Brad go, but some have said if Lucinda really liked him then she would go with him.

One wrote: “Lucinda if you really ‘fancied him’ you would go with him.”

A second said: “If Lucinda really liked Brad she’d leave with him.”

If Lucinda really liked Brad she’d leave with him 💀 #LoveIsland

A third tweeted: “If Lucinda likes Brad, she should go too.”

If Lucinda likes Brad, she should go too #LoveIsland

Others have accused Lucinda of crying fake tears.

When Brad was asked if he hoped Lucinda would leave with him, he said: “On the night, it was one of them situations where, I didn’t want her to leave [with me].

“The way we had a connection, it would be really nice to take what we had and continue it on the outside.

Who is coupled up with who?

Read more: OPINION: Is it Love or money for the contestants of Love Island 2021?

If Lucinda likes Brad, she should go too.

Meanwhile Aaron and Kaz are in a friendship couple and so are Sharon and Hugo.