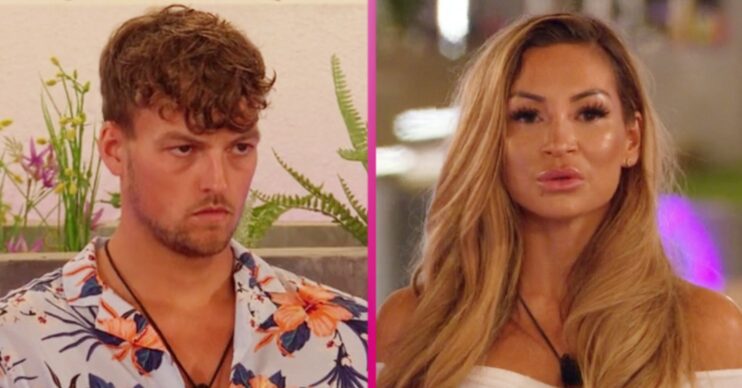 Hugo was devastated as Sharon left the villa

Love Island viewers have slammed Hugo Hammond’s reaction after being coupled up with bombshell AJ Bunker.

The lovable teacher has become a firm favourite on the ITV2 dating show in recent weeks.

However, some fans claimed they saw another side of Hugo on Love Island last night (July 18).

During Sunday night’s tense coupling, AJ chose to couple up with Hugo.

Explaining her decision, she said: “Since coming into the villa, he has made me feel so comfortable.

“He has all the right morals I’m looking for in someone long term, and I would like to explore this and get to know them a bit more, so the boy I would like to couple up with is Hugo.”

Despite initially hitting it off when she entered the villa, the teacher appeared far from impressed with AJ’s decision.

In fact, he seemed gutted as his former partner Sharon Gaffka was sent packing.

Later on, Hugo explained his disappointed reaction to AJ during an awkward chat.

He said: “I was not expecting that! I want to firstly apologise because I know my body language was off then.

“It’s just really tough because Sharon has been there from day one throughout this whole experience. She’s been my best friend in here.

“Once you picked me, I knew the consequences of that for her. It was really tough for me.”

Hugo is so ungrateful – this isn’t a free holiday mate!

Hugo added: “You got to pick first and that’s what you’ve got to do. That’s fine but why me?”

AJ explained: “You’re the guy that’s been number one for me since the start. For me, you’re the guy I see something long-term with.”

However, viewers were quick to slam Hugo’s reaction.

Taking to Twitter, one said: “Hugo is so ungrateful. This isn’t a free holiday mate #LoveIsland.”

Another shared: “Hugo you are finally being picked and you’re being rude and disgusting. I don’t like it. #LoveIsland.”

A third added: “Hugo made AJ feel like crap for picking him and now he can’t decide he likes her or not after all his complaining. Where’s Mr Nice Guy now?”

A fourth complained: “Hugo is coming off a tad ungrateful ‘why me’.. lol r u ok?”

Hugo looks so annoyed that AJ picked him 💀😂😂 #LoveIsland

A fifth wrote: “I did really like Hugo, but he’s starting to get on my nerves a bit now. He’s in Love Island that doesn’t last very long there’s no point going at your own pace in there.”

Meanwhile, others were confused by AJ’s decision.

One wrote: “Why did AJ pick Hugo? He was literally running away from her all the time. His attitude was screaming ‘do not pick me!'”

A second agreed: “AJ is flogging a dead horse with Hugo. The man is not attracted to her AT ALL. His reaction to her choosing him speaks VOLUMES!”