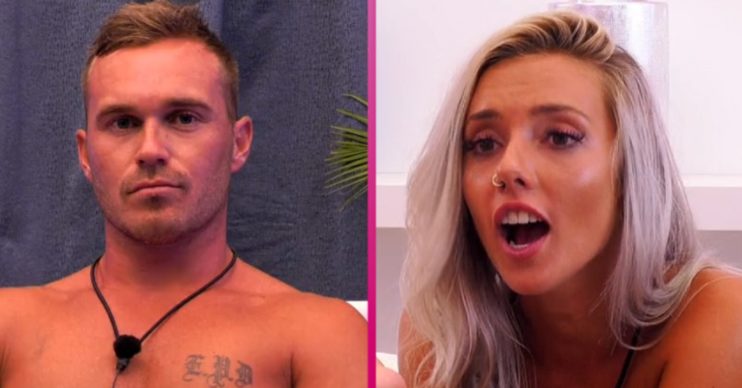 Some called it an 'absolute disgrace'

ITV2 viewers were stunned last night when a contestant on Love Island Australia threatened to stab a fellow islander with a knife.

The UK summer version of the controversial dating show was cancelled this year, amid the coronavirus lockdown, and replaced by repeats of the 2018 Australian series.

What happened on Love Island Australia?

Just days ahead of Tuesday’s (July 14) final, the gents from the remaining couples had to take the now-axed lie-detector test, answering questions put to them by the female islanders.

When Erin Barnett watched as her boyfriend, Eden Dally, admitted he found another girl, Millie Fuller, attractive, Erin blew up.

She shouted and raged, before rushing towards the kitchen. Erin then told the other islanders she was going to get a knife and stab Eden.

“I’m actually going to go get a knife and stab him,” she said. The others urged her to calm down.

Reacting on Twitter, stunned viewers asked why producers didn’t remove Erin from the villa over the threats.

One said: “[Erin] should have been thrown off for saying she would get a knife and stab Eden! Absolute disgrace! #LoveIslandAU.”

Another replied: “Agreed, she should have been removed.”

A third demanded to know why Erin was ‘still in the villa’ after the ‘threat’.

Someone else tweeted: “Did Erin really say that she was going to get a knife? She might have been joking but that’s not OK #LoveIslandAU #LoveIslandAUS.”

I don’t understand how Erin wasn’t kicked out after saying she was going to stab Eden. Like wtf! #LoveIslandAU

Agreed, she should have been removed

erin literally threatened her boyfriend with a knife and is still in the villa?!!! #loveislandau #loveislandaus

A fifth said they couldn’t understand why bosses didn’t ‘kick Erin out’ over her comment.

“Does #LoveIslandAU have different producers to #LoveIslandUK?” another asked, gobsmacked. “I feel a lot wouldn’t be tolerated if the UK cast did it, the bullying, the squaring up to each other, ‘I’m going to get a knife’.”

Did Erin really say that she was going to get a knife? She might have been joking but that's not ok. #LoveIslandAU #LoveIslandAUS

Does #LoveIslandAU have different producers to #LoveIslandUK i feel a lot wouldn't be tolerated if the UK cast did it, the bullying, the squaring up to each other, "im going to get a knife".

Erin and Eden found romance at the very start of the series and were a couple throughout.

But shortly after the final originally aired in 2018, they parted ways. As reported by Capital FM, they said in a joint statement at the time: “We look back and cherish the time we have spent together, the memories we have created, in both Spain and in Australia.

“But we have to be honest within ourselves as we realise that our forever as a couple, is no longer.”

Have you enjoyed watching the Australian version of Love Island? Leave us a comment on our Facebook page @EntertainmentDailyFix and let us know.