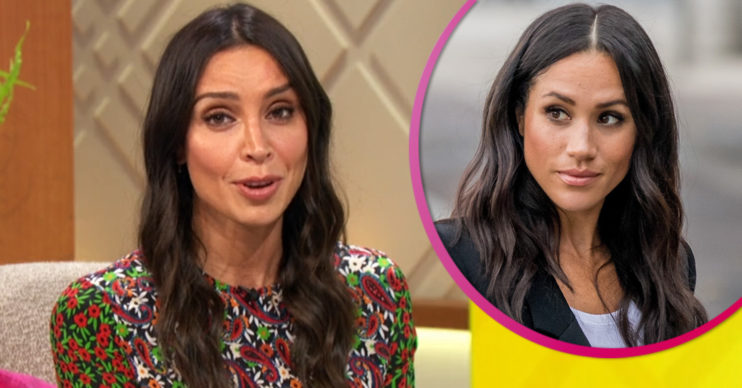 Lorraine viewers spotted an awkward blunder as the show paid tribute to Meghan Markle on her birthday.

The ITV show, which is being hosted by Christine Lampard over the summer, honoured the former royal on her birthday today (August 4).

However, fans appeared upset after spotting a spelling mistake during the segment.

Read more: Meghan Markle latest: Thomas Markle has ‘given up hope’ of reuniting with daughter

As footage of the former Suits star aired, a message saying “Happy Birthday Megan” showed on the screen.

The blunder didn’t go unnoticed with viewers, who rushed to Twitter to point out the spelling mistake.

One wrote: “@lorrainehow do you manage to spell Meghan wrong?”

Another said: “Another example of the unconscious bias against Meghan #Markle in the British #media @lorraine not even having the respect to spell her name right just now @ITV.”

@lorraine how do you manage to spell Meghan wrong?

We’re certain the blunder will be the last thing on Meghan’s mind as she marks her special day in Los Angeles.

She will likely be joined by her husband Prince Harry and their one-year-old son Archie.

To mark the occasion, the Duke and Duchess of Cambridge shared a photo of Meghan speaking to a young child during a royal engagement.

The post read: “Wishing a very happy birthday to The Duchess of Sussex today!”

A sweet message was also shared to the royal family social media account in honour of Meghan.

They celebrated the occasion with a photo of Meghan and the Queen during a joint visit to Chester in 2018.

It read: “Wishing The Duchess of Sussex a very happy birthday!”

The occasion comes days after Meghan and Harry – who stepped down from royal duties in March – launched a legal bid against LA paparazzi.

A paparazzi drone was said to have captured shots of Archie on the drive of their home.

They have accused the paparazzi of marketing the photos using misleading captions.

The captions reportedly indicate that Archie was in a public place when the drone took the images.

However, Harry and Meghan insist that Archie has not been out in public since they arrived in the California city.

The couple’s attorney, Michael Kump, states that this is an urgent matter and a “race against the clock”.

Speaking to The Mail, he said in a statement: “The Duke and Duchess of Sussex are filing this lawsuit to protect their young son’s right to privacy in their home without intrusion by photographers.

“And to uncover and stop those who seek to profit from these illegal actions.

Read more: Prince William on how his love of football scared his children: ‘Looked at me in horror’

“This is not an innocent mistake, but an intentional attempt to evade liability.

“This is a race against the clock.”