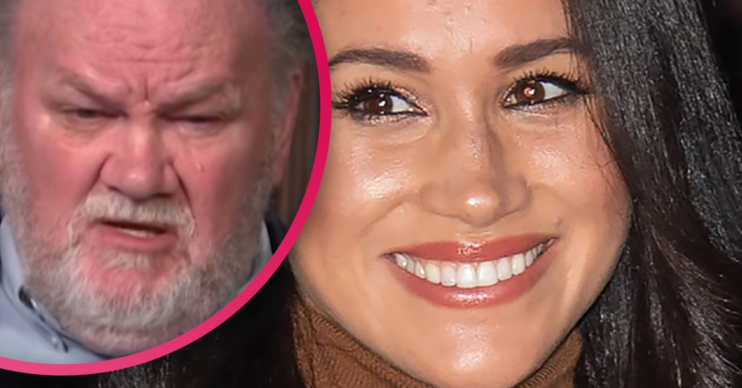 Meghan Markle latest: Thomas Markle has ‘given up hope’ of reuniting with daughter

It is claimed he 'doesn't trust his daughter'

Meghan Markle’s dad Thomas has ‘given up hope’ of making it up with his daughter, according to reports.

Book allegations are reported to have stunned Thomas Markle – and his son reckons Thomas no longer ‘trusts’ Meghan.

Thomas Jnr told the Mirror that revelations from Finding Freedom will not heal the rift between father and daughter.

Thomas and Meghan are believed to have been estranged since her 2018 wedding to Prince Harry.

Read more: Prince William on how his love of football scared his children: ‘Looked at me in horror’

And her dad disputes allegations he snubbed messages and phone calls asking him to attend the ceremony.

Thomas Jnr told the newspaper his dad “doesn’t trust his daughter, and doesn’t want to know that person”.

That just did not happen.

Meghan’s estranged half-brother also claimed a different version of events between Harry and his father-in-law to be.

Thomas Jnr continued: “It says Harry spoke to our dad to say if he’d listened to him – Harry – there wouldn’t have been any problems. That just did not happen.”

It was also claimed that Thomas did not hear from Meghan on his recent 76th birthday.

Thomas Jnr added: “As far as a reunion goes, he’s given up on Meghan and Harry completely.”

He also noted Thomas intends to spend his future travelling the world.

Earlier this week Thomas blasted the Duke and Duchess of Sussex for ‘whining’ and ‘complaining’.

The couple have distanced themselves for assisting with the biography.

Regarding the book, he told The Sun newspaper: “This is the worst time in the world for them to be whining and complaining about anything – because people everywhere are suffering due to the coronavirus pandemic.

“I love my daughter but I really don’t appreciate what she’s become right now.”

He previously claimed to have been “ghosted” by his daughter.

Thomas said during an interview on Good Morning Britain: “I’m not sure why it’s happening. I love my daughter very much.

“I wish she would reach out, send me a text, anything.

Thomas also claimed Meghan has a history of “dumping” those around her.

He added: “My daughter dumped me one day before she got married.