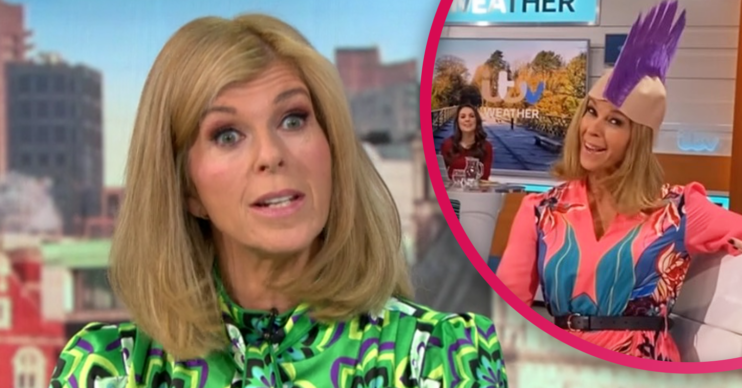 Kate Garraway showed off a dramatic new look in behind-the-scenes footage from GMB posted to Instagram.

He is, of course, famous for his multi-coloured mohawk – and it’s this which inspired Kate’s new look.

Good Morning Britain presenter Kate was seen preening herself in a video shared to Instagram by her co-host Ben Shephard.

In the clip, Kate can been seen looking at herself in her phone, looking as if she was about to take a selfie.

And, in tribute to her guest, it appears Kate showed off a dramatic new look.

She was seen sporting a spiky purple mohawk in the video shared by Ben.

Kate was seen smiling for Ben’s video, which he shared to his Instagram Stories.

However, for anyone fearing that Kate had completely changed up her blonde locks, fear not.

Her makeover was simply aided by a mohawk wig, which gave the GMB stars a behind-the-scenes laugh.

Meanwhile, the fleeting new look comes after Kate revealed a seasonal hair mishap on the show earlier this week.

Speaking to Ben and Susanna Reid, she revealed her “bewilderment” at how “ginger” her hair had become over Christmas.

“I’m a bit bewildered by how ginger I’ve become over the festive period,” she confessed.

“So what was it?” a laughing Ben asked.

“Hair root dye – even Bill [Kate’s son] said ‘I don’t think anything can save this, Mum,’” Kate declared.

The 54-year-old presenter then revealed that solid shampooing over the last few days had “calmed it down a tad”.

It’s not been a good week for Kate when it comes to her appearance.

Kate I’m sorry but it looks like your wearing a 1950s curtain!

And it didn’t take long for GMB viewers at home to begin poking fun at Kate’s outfit, with many asking why the star looked as though she’d been plucked out of a completely different decade!

“Kate I’m sorry but it looks like your wearing a 1950s curtain,” one said.

So what do you think of Kate’s new look? Tell us on our Facebook page @EntertainmentDailyFix.