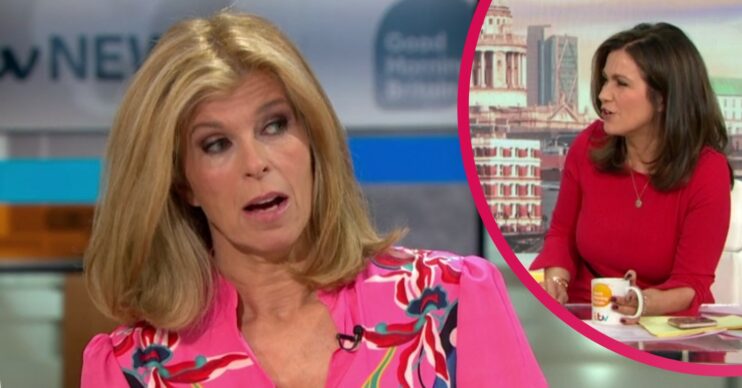 Even Kate's son thought her hair was beyond saving!

Kate Garraway revealed that she’d suffered somewhat of a hair disaster over the Christmas period during her return to Good Morning Britain this morning.

The 54-year-old was left “bewildered” at how ginger her hair had become over the holiday period!

Kate returned to GMB today (Thursday, January 6) following her Christmas break. The presenter then revealed to hosts Ben Shephard and Susanna Reid that she’d suffered a bit of a hair-dying disaster on her days off over Christmas.

“I’m a bit bewildered by how ginger I’ve become over the festive period,” she confessed.

“Hair root dye,” Kate replied. “Even Bill said ‘I don’t think anything can save this, mum.'”

The 54-year-old then revealed that solid shampooing over the last few days had “calmed it down a tad”.

How did the GMB hosts react?

Whilst Kate wasn’t a big fan of her new hair colour, Susanna definitely was – or so she claimed!

“I think it looks lovely,” she gushed. Kate was sceptical of her co-host though.

“But the problem is, Susanna, that you’re so lovely that you would never tell me the truth!” she laughed. Ben couldn’t help but agree.

“She has got a point,” he said. “Really?” Susanna replied. “I think I’m pretty well known for being brutally honest.”

“Yes, but not to me,” Kate agreed. “You’re always nurturing.”

What else has Kate Garraway been up to recently?

It’s been a tough few days for Kate, despite the fact that she was awarded an MBE on New Year’s Day.

The presenter faced backlash online for receiving the award, with many questioning why exactly she’d been given it.

“MBE for looking after her husband like many others did – a typical celebrity award for doing nothing extraordinary,” one person tweeted when the news broke.

As well as the backlash, Kate was forced to give a difficult update on her husband Derek Draper‘s progress on Tuesday (January 4).

During her interview with GMB, Kate revealed that Derek was still “very weak” and spent a lot of time sleeping. Kate and family recently took Derek out to the pantomime, something that “took everything out of him”.

“He thought it was worth it and it was a special thing to be with the children holding their hands and doing something normal but it took everything out of him,” she said.