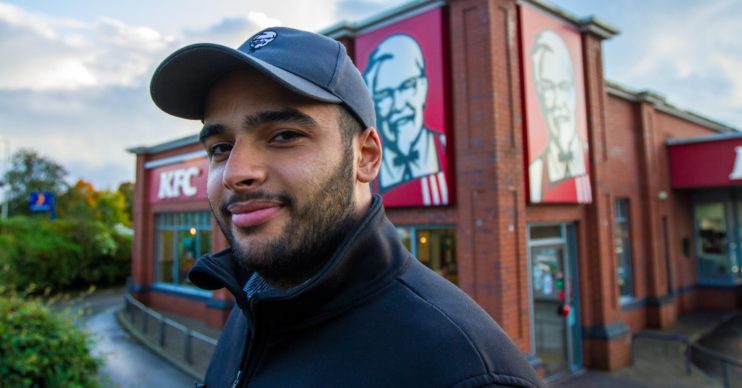 Inside KFC at Christmas: What’s the secret recipe for KFC chicken?

Inside KFC at Christmas is a one-off documentary about the chain’s turbulent 2020 – but do they reveal what’s the secret recipe for KFC chicken?

The fast food restaurant is a billion dollar success story, mainly due to its world famous recipe for deep fried chicken.

Here’s everything you need to know about the documentary and THAT recipe.

What is Inside KFC about?

Channel 4 go behind the scenes as the team at KFC prepare to face Christmas after one of their most challenging years.

This documentary will provide a unique look at one of the nation’s best loved fast food restaurants – from the board room to the kitchen floor – via the likeable staff.

We watch KFC as they attempt to launch a new festive burger to keep customers coming back.

Viewers will also follow the struggles of the franchise owners trying to keep their businesses going during a global pandemic.

What is the KFC Christmas burger?

KFC are offering a burger this Christmas that comes with a hash brown gravy boat inside.

It features an Original Recipe chicken fillet topped with a slice of cheese and a hash brown.

However, it’s a hash brown with a difference as it features a well on top that you can pour a jug of KFC’s delicious gravy on to.

Not only that, it also features a layer of “gravynnaise” – yes, gravy-flavoured mayonnaise!

Announcing the launch, KFC said: “We see you. Yeah you. The one who queues eagerly to get a taste of KFC’s gravy. The one ordering that extra pot to liberally dunk, dip or drizzle.

“The gravy addict who stocks up the fridge way ahead of Christmas Day.

“Every year you go to great lengths to get your KFC gravy fix, so this Christmas we’ve got a tree-mendous (sorry!) treat for you.”

The secret recipe for KFC’s world famous chicken is a blend of 11 herbs and spices – but the exact combination has always been a closely guarded secret.

The slip of paper that bears the recipe is locked behind concrete walls with motion sensors and a crack security team.

Only two KFC executives are allowed to know the recipe at any given time.

In 2020, KFC recipes were among the UK’s top Google searches as budding chefs tried to recreate the dishes at home.

During lockdown, a leaked recipe claimed to be the very same as KFC’s famous finger-licking chicken.

The ingredients include the now legendary blend of 11 herbs and spices.

Dip chicken into still water, before dredging in plain white flour and the spice mix.

Leave for 15 minutes before deep frying at 340 degrees.

Is there a real Colonel Sanders?

During that time, he developed his “secret recipe” and his patented method of cooking chicken in a pressure fryer.

The title ‘colonel’ was honorary…

He was a Kentucky Colonel, not one of military rank.

Is there a film about Colonel Sanders?

Mario Lopez currently stars as Colonel Sanders in the short film A Recipe for Seduction.

The Saved by the Bell actor portrays a sexy version of the famed mascot in the film, which is really a commercial for KFC.

His task is to protect his secret recipe at all costs!

The parody short film is done in the spirit of a soapy thriller and airs on Lifetime.