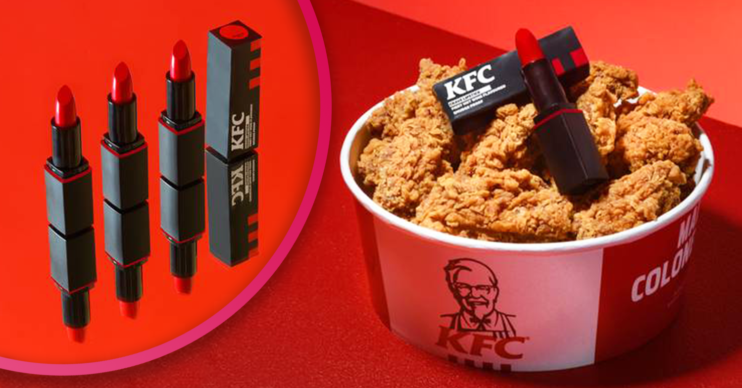 KFC has launched the ultimate accessory for fans of its food – a lipstick that actually tastes like Hot Wings.

The limited-edition lippy was launched in aid of National Lipstick Day (July 29), which just so happened to collide with National Wing Day.

The result? A “bucket-red” lippy that’s guaranteed to be “WingProof”.

Yes, the long-lasting lipstick – called KFC Crave – won’t wear off at the first sign of a chicken wing.

And, instead of having the usual waxy lipstick taste, the company has injected a dash of flavour.

Its lippy is made distilled Hot Wings and chilli oils – so prepare for that trademark sting!

The lipstick only comes in one shade, a universally-flattering Bucket Red No.11.

Not only does it taste good, but it’s been formulated with a new eight-hour conditioning and smudge proof technology that means it can survive a KFC wing-sesh.

A KFC rep said: “Set to take the beauty world by storm, KFC Crave has been designed with a revolutionary new WingProof formula.”

They added: “Not only does it taste lip-smackingly good, but it’s been formulated with a new eight-hour conditioning and smudge proof technology that means it can survive a wing-sesh.”

The rep concluded: “The budge-proof finish gives you the freedom to wear your lipstick and enjoy your wings.”

Where can I buy one?

Before you rush out to buy one, the lipstick isn’t on general sale.

Just 400, erm, lucky KFC fans will get the chance to own one of the lipsticks.

To win one, you just have to sign up to the KFC Rewards & Offers page here and you’ll get details of how to enter sent to you in an email.

“KFC lipstick. Just no,” said one.

“Not sure how I feel about this,” another tweeted.

Head to out Facebook page @EntertainmentDailyFix and tell us if you’ll be trying to win one!