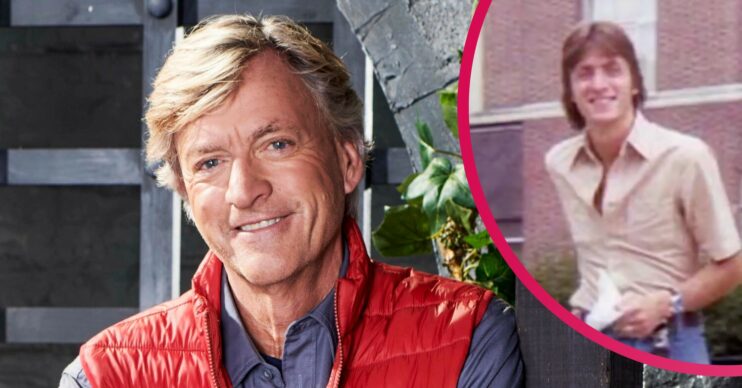 Look at those flares!

Richard Madeley fans were stunned at unrecognisable young photos of the I’m A Celebrity star after they were posted on his Instagram account last night.

Richard’s Instagram account posted the photos last night for his 6,100 followers to see. The throwback snap shows a young Richard Madeley wearing a pale pink shirt, smiling at someone, or something, off-camera.

The post was captioned: “When you spot your harmonious chorus of joy coming towards your table from the kitchen.” It added a cake emoji at the end of the caption.

The photo was also posted on Richard’s Instagram story, with the caption: “POV Richard’s ‘really, really proud of you’.”

What other pictures were there?

It wasn’t the only throwback photo that was posted on his Instagram last night. His family also uploaded three old pictures of him on his story too.

In one photo, Richard, wearing flares, on what looks to be the same day as the photo posted on his feed, is walking down a street. The caption reads: “POV you are the dishes and Richard’s coming to wash you.”

This was also posted on Richard’s feed. It was captioned with: “Lots of lovely comments about how Richard is looking in the castle, but do you think he could still rock a pair of flares.”

Another pic shows a younger Richard Madeley standing under a road sign that tells him that he was three-and-a-half miles away from the town of Madeley.

A third snap shows a young Richard wearing a leather jacket over a cream turtle-neck.

What did fans say about Richard Madeley’s throwback snaps?

Fans were both stunned and amused by Richard’s throwback photo and took to the comments to let their feelings be known.

Read more: I’m A Celebrity 2021 viewers all have theory about Danny Miller

The 65-year-old Good Morning Britain presenter is currently taking part in I’m A Celebrity, which is being filmed in Gwrych Castle, North Wales.

Last night (Monday 22 November) Richard took part in a game where campmates had to avoid having their cakes blown up. This is what Richard’s photo on Instagram is referencing.

Thankfully for Richard and Arlene Phillips, they won the challenge and got to take the cake back to their campmates.

You can catch Richard Madeley on I’m A Celebrity again tonight on ITV and ITV Hub at 9.15 pm.

What did you make of Richard Madeley’s throwback snaps? Leave us a comment on our Facebook page @EntertainmentDailyFix and let us know what you think.