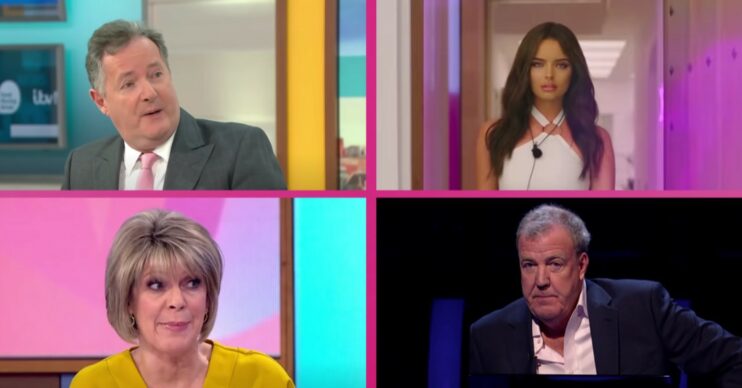 I’m A Celebrity: 13 stars we’d love to see on the show

I’m A Celebrity airs every year in November and, over the years, we’ve seen many stars take on the challenge.

However, there are many we’ve not seen on the show – and loads we’d love to see put through the grisly Bushtucker Trials.

Maura Higgins appeared in the 2019 summer series of Love Island.

Since her appearance on Love Island she’s landed a couple of presenting roles.

Read more: I’m A Celebrity contestants who have shown the most star power in their trials

Not only is she absolutely hilarious, she proved on Love Island that she’s not one to hold back or take anyone’s nonsense.

We think she would be highly entertaining on I’m A Celebrity.

Gordon Ramsay is one of the world’s most famous TV chefs.

This year we’ve seen Gordon’s daughter Tilly show off her dance moves on Strictly Come Dancing, now we say it’s time to see Gordon take on the challenge of the jungle.

Read more: The biggest divas to ever appear on I’m A Celebrity

If you’ve seen any of Gordon’s TV shows including Hell’s Kitchen or Hotel Hell you will know Gordon definitely isn’t afraid to tell people what he thinks.

However, he does have a kind, caring side, which would be a good mix for the jungle.

He would be brilliant in the eating trials and it’s always good to have someone in there who can cook… unless they only win rice and beans.

Corrie fans will know David is well-known for his hilarious one-liners, however, it would be good to see Jack on TV as himself.

If you’ve ever listened to Jack’s podcast Sofa Cinema Club, you will know he’s very good at voicing his opinions and has some very good points, making great entertainment.

Jack has never competed in Strictly, Dancing On Ice or I’m A Celebrity so it would be good to see him take part one year.

Television presenter Davina McCall has made numerous TV appearances over the years.

Davina is well-known for presenting Big Brother from 2000 until 2010.

With her experience hosting Big Brother, it would be interesting to see how she would get on in the jungle.

She’s funny, smart and we can imagine she wouldn’t be afraid of a Bushtucker trial.

Is it time to get Davina in?

Comedian and actor Jack Whitehall would be perfect for I’m A Celebrity.

Jack has proved himself to be a comedic genius during his stand-up shows.

As well as going on multiple tours, he also starred in Bad Education and Fresh Meat.

You may also have seen his Netflix show Travels with my Father, which also starred his father Michael Whitehall.

During his stand up shows, Jack tells stories from his life and we can imagine I’m A Celebrity would give him some stories to tell.

We’d love to see Jack take on some Bushtucker Trials and sat around the campfire telling funny stories.

ITV, give Jack a call!

Chloe Burrows appeared on Love Island 2021 and became an icon.

She proved to be hilarious with her one-liners, eye rolls and telling people exactly what she thinks.

Chloe seems to have done well for herself since leaving the villa and we want to see more of her on TV.

ITV if you don’t do it, that’s very muggy!

Karl Pilkington is a TV presenter, author, comedian and voice actor – a man of many talents.

Many will know him from The Ricky Gervais Show and and An Idiot Abroad.

He would be another hilarious addition to the show as we could see him having some very interesting conversations with the other campmates.

We know over the years many fans have said they want to see Karl on I’m A Celeb and we can agree.

Get Karl in the jungle!

Ruth has showed off her dancing skills on Strictly, now it’s time to get her in the jungle.

She’s fascinating to listen to and we can image she’d have some very entertaining conversations in the jungle.

Ruth is also very compassionate and kind, which is definitely needed if you’re trapped in a jungle with 12 other people in the Australian Jungle (or Welsh castle).

We think she’d be a lovely addition to the camp.

Jeremy Clarkson is well-known for presenting Top Gear, The Grand Tour, Who Wants to be a Millionaire and his new show, Clarkson’s Farm.

Like many on this list, Jeremy is not afraid to give his opinion which let’s face it, is essential on I’m A Celeb.

He’s also got a hilarious manner which would make for great entertainment not just on the trials, but also around the camp.

Steph is a journalist and TV presenter and currently hosts Steph’s Packed Lunch.

She is extremely interesting to listen to and is also very funny. We reckon Steph would make good conversations and bring up good topics for campmates to talk about.

Journalist, writer and TV personality Piers Morgan is very well-known with the public.

Earlier this year, Piers walked out of GMB on-air during an argument with co-host Alex Beresford.

Piers is not afraid to voice his opinions and although some may disagree, he can be interesting to listen to.

We think he could really bring some drama to the I’m A Celeb camp.

Also lets face it, we’d love to see him take on the eating trials.

Davood Ghadami is well-known for playing Kush Kazemi in EastEnders from 2014 until 2021.

In 2017 Davood took part in Strictly, now it’s time for him to get into the jungle.

We could see Davood having a good bromance with Jack Whitehall in the jungle.

We’ve seen him play many characters on TV, but now it’s time to see Davood.

Read more: Where is the I’m a Celebrity castle and can  you book a stay there?

Businesswoman and TV personality Deborah Meaden is very well-known for her appearances on Dragon’s Den.

Deborah is a woman who knows exactly what she’s talking about and would make good conversation around the camp.

We also think she’d definitely rise to the challenge when it comes to Bushtucker trials.

Who would you like to see on I’m A Celebrity? Head to our Facebook page @EntertainmentDailyFix and tell us what you think of our story.