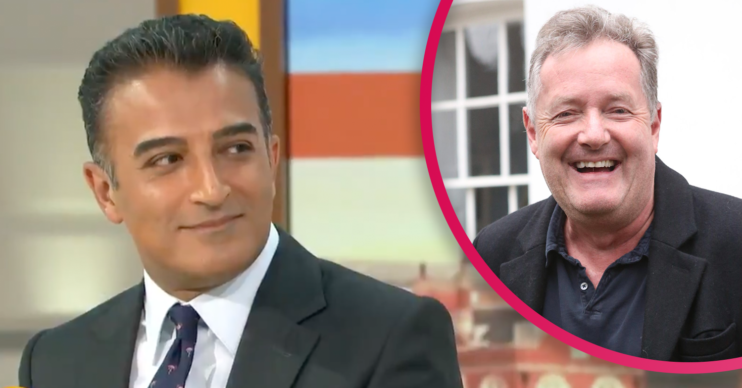 Comments came after he 'shouted' at MP Oliver Dowden

Actor, comedian and presenter Adil has stepped up to front more episodes of the ITV breakfast show since Piers Morgan‘s departure in March.

And it’s the man himself that Adil has today (April 21) been compared to.

Although sadly we have to admit, not in a good way…

What did GMB viewers say about Adil Ray?

The host “let rip” as he challenged the MP to recognise systematic racism in the UK.

And, while some chastised Adil for “shouting” at Dowden, others said Adil’s impassioned hosting “genuinely moved” them.

Commenting on Twitter, one viewer said: “How dare @adilray shout at a government minister! Get rid of him!”

Others said Adil was “trying so hard to be the next Piers”.

“Give it a rest Piers wannabe,” slammed one.

“A wannabe Piers Morgan,” declared another.

“Can this Piers Morgan wannabe please get off the screen? Thank you,” said another.

“Is Adil Ray auditioning for Piers Morgan’s role. If so 0/10,” declared another.

Is Adil Ray auditioning for Piers Morgan’s role. If so 0/10.

However, others cruelly took things a step further and branded Adil a “Poundshop Piers”.

A second seemed to agree with the cruel insult.

“Poundland Piers Morgan is doing my head in we need the real thing back #GMB #bringbackpiers,” they tweeted.

‘Adil that genuinely moved me’

One fan said: “Oliver Dowden was woeful and at best incompetent. Adil Ray was spot on.”

A third said: “Adil that genuinely moved me! You should be very proud.”

“Well done Adil Ray for asking the questions that others seem scared to ask,” they said.