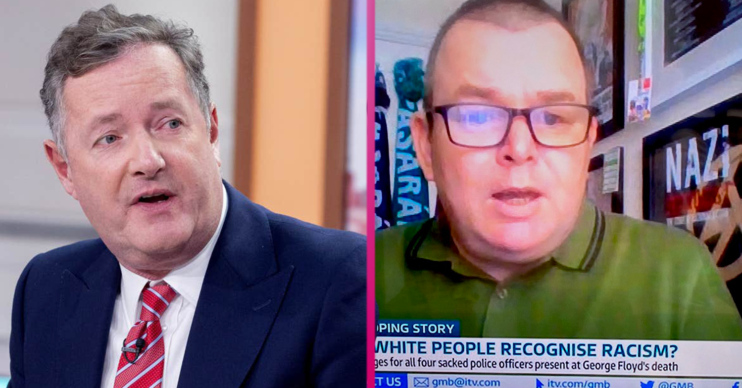 Matthew Collins was introduced on the show as a reformed racist who has turned his life around.

But those tuning in at home couldn’t help but notice he had a poster with the word Nazi on it positioned in shot of the camera.

Good Morning Britain viewers were quick to take to Twitter afterwards to react.

One wrote: “Really @itvnews @GMB @piersmorgan – he’s got a nazi sign behind him and he’s talking about anti-racism?

“What is going on?! How can you not see it? How can allow it? #whiteprivelege #BlackLivesMattterUK #educateyourself.”

Another added: “@piersmorgan @GMB is it just me that’s uncomfortable with your guests Nazi picture behind him in shot?”

Moments later, a third tweeted: “@GMB why do you have a person saying they are no longer racist on your programme with a nazi poster clear to see on camera at the the side of them?”

Shortly after, a fourth wrote: “@GMB How can this man sit there and say he is no longer a racist? Did you see the Nazi poster in the background? Don’t believe it.”

However, everyone can calm down as the artwork is the cover for Matthew’s book Nazi Terrorist: The Story of National Action.

He co-wrote the title with pal Robbie Mullen.

The book reveals how he saved Labour MP Rosie Cooper and Det Con Victoria Henderson from being assassinated by neo-Nazi Jack Renshaw.

Unfortunately, neither Piers Morgan or Susanna Reid asked him about the best-selling title, or the poster in shot.

Opening up about how he decided to change his ways, Matthew said: “It was not overnight.

“My racism was not the unwitting racism that we see – mine was quite learned and profound and deliberate.

“I addressed that most importantly and immediately, and I addressed the things I said and did deliberately to cause offence and tear at people’s dignity.”

He added: “To understand racism and how it works, and the actions and words that people use, takes a long time. And it takes empathy.

“People have to understand the effects racism has upon other people and how it tears away at their dignity and makes them feel about themselves.”

@piersmorgan @GMB Not racist no more…….. why is there a Nazi poster in the background 🤷🏼‍♂️ pic.twitter.com/JeytSyTmL5

Matthew then called on white people to re-evaluate the language that they use when talking about race.

“I think a lot of the racism we see that offends people isn’t deliberate,” he continued.

“We have to address the way that we speak and think and take into consideration other people’s feelings.

“Most racism we see is a direct result of people’s ignorance.”