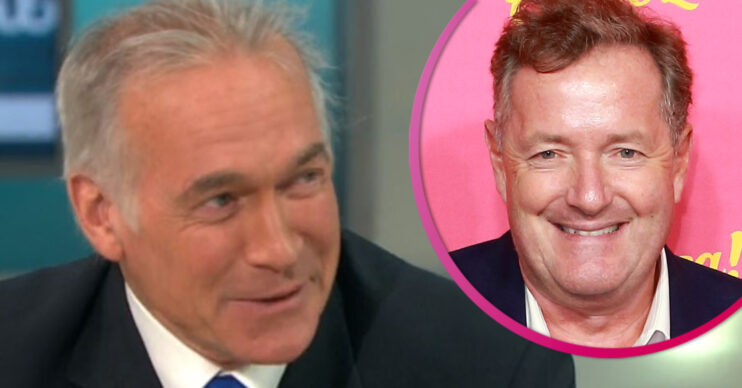 The Good Morning Britain panel discussed the news today and couldn’t help but poke fun at Piers, who quit the show in March.

Piers went viral after storming off set after a clash with weather presenter Alex Beresford about Meghan Markle‘s Oprah interview.

What did GMB stars say about Piers Morgan?

Charlotte Hawkins said: “We should also give a mention to Piers Morgan, who has been nominated for Best TV Presenter.”

Journalist Kevin Maguire was on the show and joked: “Who is he? It rings a bell, who was that?”

Kate Garraway said: “I remember when Good Morning Britain was nominated – it must have been two years ago when there was a proper ceremony – and it didn’t win and he was very cross.

Dr Hilary Jones then quipped: “It will be ironic if he wins it when he’s off air.”

Meanwhile, Piers spoke about his nomination on Twitter today.

He wrote: “Most amused to finally be nominated for TV Presenter of the Year at the ⁦@OfficialNTAs  – though could be a tad #awks for ITV if I win for my work on ⁦@GMB.

“Might have to pull a Brando and send Princess Pinocchio along to receive it on my behalf.”

Who is Piers up against?

Piers is up against This Morning hosts Holly Willoughby, Alison Hammond, The Chase presenter Bradley Walsh and TV duo Ant and Dec.

Piers left GMB back in March after his comments about Meghan sparked thousands of Ofcom complaints.

After Meghan’s Oprah chat, in which she discussed feeling suicidal and claimed there were ‘concerns’ within the royal family about son Archie’s skin colour, Piers said he ‘didn’t believe a word’ she had said.