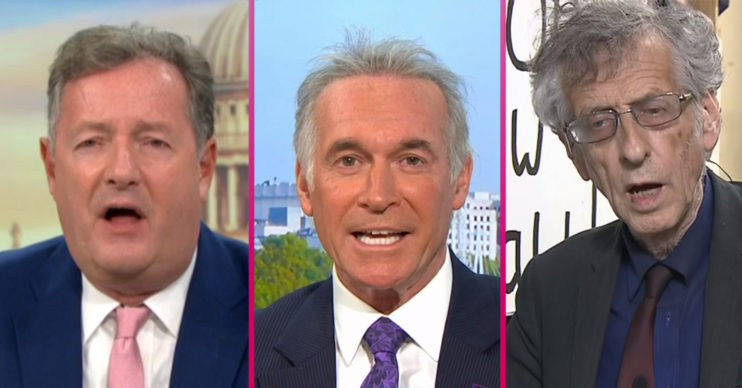 Piers Corbyn accused the presenters of interrupting him

Dr Hilary Jones also criticised Mr Corbyn and insisted he shouldn’t even be on air preaching his “dangerous” views on the virus.

Mr Corbyn was recently fined £10,000 under new coronavirus laws for his role in an anti-lockdown protest.

Read more: Piers Morgan warns burglars he ‘will find them’ after South of France villa was robbed

Mr Corbyn, who was arrested on Saturday for organising the anti-lockdown protest, is also against face masks and vaccinations.

Piers asked: “Do you believe the coronavirus pandemic is real?”

Mr Corbyn replied: “We’re challenging the government to give actual evidence that there is a virus.”

Susanna cut in: “The Prime Minister himself was hospitalised with the virus. How much more evidence do you need?”

Mr Corbyn questioned: “Well, was he hospitalised with the virus or was he ill with something else?

“There’s a lot of claims going on.”

Piers interrupted: “You’re suggesting the Prime Minister invented having a virus that may not exist.”

My Corbyn said: “I don’t know if anyone invented it or not but the numbers of people getting whatever they’re getting are declining rapidly.”

Piers cut in: “25 million people around the world have tested positive for COVID-19…”

My Corbyn began interrupting Piers as the host insisted: “Hang on, let me finish the question.

“Over eight hundred thousand people have died from COVID-19. What part of that do you think does not constitute a pandemic?”

Mr Corbyn said: “Well, those people have been labelled COVID when it might have been completely something else.

I don’t know where you get your rubbish fake news from and you shouldn’t be on air!

“It’s not a pandemic because the numbers dying are nothing different from a normal year.”

Susanna hit back: “More than 40,000 people have died in this country as a result of COVID directly.

“What an insult to their families to say it’s some kind of fiction to boost international pharmaceutical companies.”

Mr Corbyn then insisted there’s “no need for a vaccine” because they “make money for mega corporations and the pharmaceutical industries”.

The trio then began talking over each other as Dr Hilary was brought into the debate.

Speaking over Mr Corbyn, Dr Hilary said: “The virus has been identified by the electron microscope.

“We know that this is a new virus and it has nothing to do with viruses we’ve seen in the last 14 years.

Despite the stark numbers, @Piers_Corbyn disagrees that it is a pandemic and says it's a 'psychological operation to close down the economy.' pic.twitter.com/9EH9tnYhZN

“You say that the older vaccines could of worked, they absolutely did work.”

Dr Hilary went on to explain that cases of measles and meningitis have reduced over the years because of vaccines.

He added: “You are dangerous, you shouldn’t be preaching, you’re not medically qualified.

What did you think of the GMB debate? Head to our Facebook page @EntertainmentDailyFix and tell us your thoughts.