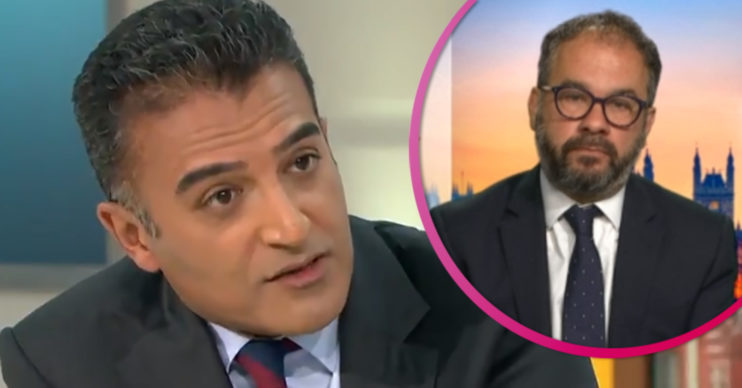 Some accused him of 'turning into Piers Morgan'

However, during a discussion about Boris Johnson, Adil didn’t hold back when discussing the prime minister’s lack of TV interviews during the pandemic.

What did Adil Ray say on GMB?

“It’s very different than appearing on the BBC, or Sky, or even here and being asked questions for an interview that’ll last 10 minutes.

“You know full well that is very very different.”

Viewers weren’t happy on Twitter, and said he appeared to be shouting.

One person said: “I really can’t be bothered watching @GMB with Adil shouting like he Piers #GMB.”

Another wrote: “For heavens sake stop being so rude Adil Ray.

#GMB For heavens sake stop being so rude Adil Ray. Your no Piers Morgan although you’re trying to be. Your not giving Paul Scully a chance to reply. RUDE….

“You’re no Piers Morgan although you’re trying to be. You’re not giving Paul Scully a chance to reply. RUDE….”

One added: “Since when did Adil Ray turn into Piers Morgan? Shouting a lot!”

However, others loved Adil’s approach on GMB.

One tweeted: “@adilray needs to be given a permanent position on @GMB. He’s respectful and robust in his questioning. Refreshing.”

Another wrote: “I think @adilray should be given the permanent role @GMB. Sharp and inquisitive. Holds people to account.”

When did Piers leave GMB?

Piers quit the ITV daytime show back in March after a backlash over his criticism of Meghan Markle in her Oprah interview.