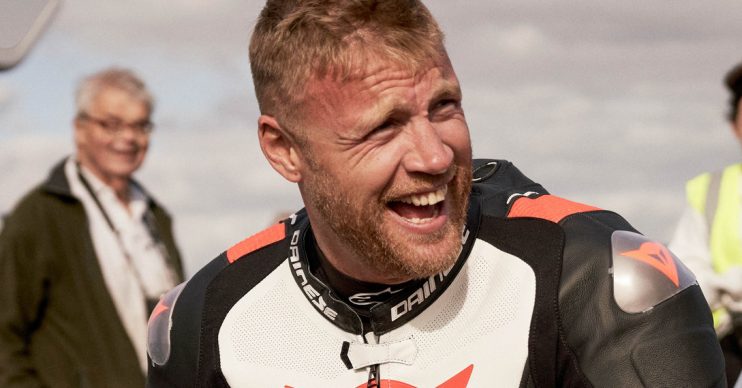 Freddie, 42, was seen hurtling out of control on a three-wheeled cyclecar in the show’s latest madcap stunt.

And, as fellow presenters Chris Harris and Paddy McGuiness looked on terrified, the clip ended as Freddie came off the track.

"I can't stop…"@flintoff11 is making a bit of a habit of this. Tune in Sunday, 8pm on @BBCTwo to watch Fearless Freddie in action #TopGear pic.twitter.com/TSzavZnfYy

For his latest dangerous challenge, Freddie took to a small three-wheeled cyclecar that was only inches off the ground.

As he sped down a runway, Chris and Paddy were both amazed at the speed he was going.

“Look at him go!” they shouted, and mouthed “wow” as he crossed a speed camera.

But things started to turn, when Freddie shouted, “I can’t stop! I’m running out of runway!”

Chris looked fearful as he muttered, “What’s he doing?!”

The camera cut when he went off the runway and into the grass.

The Sun reports that onlookers said that it “could easily have been a similar outcome” to former Top Gear presenter Richard Hammond, who crashed and sustained a life-threatening head injury on the same runway in 2006.

Then there was an almighty bang. Dust was flying everywhere and everyone raced over.

“He was going flat out,” another onlooker said. “Then there was an almighty bang. Dust was flying everywhere and everyone raced over.”

The owner and maker of the trike, Trevor Duckworth, said: “Freddie asked me how fast it would go. I said about 120mph and he hit 124mph so he was on the button.

Tonight on @dancingonice its props week… anything could happen! See you on @itv @6pm… ❤️ Dress by @iris_serban Jewellery by @williamandson Shoes by @sophiawebster

Elsewhere, it was recently announced that Freddie will be teaming up with This Morning’s Holly Willoughby for an Olympics-themed TV show.

The pair are set to join forces for The Real 2020 Games, which will see celebrities take part in a number of Olympic-style events around the time of Tokyo 2020.

A source told The Sun: “Freddie’s a fantastic presenter and bosses thought he would be the perfect fit working with Holly.

“They know each other anyway and on-screen they really bounce off one another. Freddie’s cheeky personality is the perfect match for Holly and bosses think they are going to prove a ratings hit.”