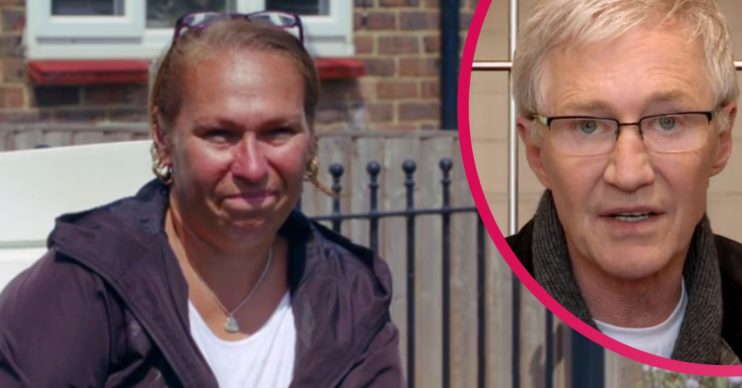 The pooch was rescued after he was found roaming the streets

For the Love of Dogs viewers were left feeling emotional when it revealed one of the stars of the show, Frank, had died.

The playful Staffordshire bull terrier – came to Battersea Dogs & Cats Home in 2006 after someone found him roaming the streets – had to be put down at the age of 13 when his owner, Rachel, took him to the vets over sores on his face.

What happened with Frank on For the Love of Dogs?

They feared the sores were cancerous. So Rachel made the heartbreaking decision to do what was best for Frank and have him put down.

Fighting back tears on Paul O’Grady For the Love of Dogs: What Happened Next, Rachel explained that she was initially advised to leave the room during Frank’s final moments. Vets worried it might prove too upsetting.

Read more: How well do you know For the Love of Dogs host Paul O’Grady? Take our quiz!

But Rachel refused, insisting on remaining by Frank’s side until the end.

She explained: “I found some quite large sores down his face. I took him to the vets, they turned round and said it could be cancerous. I knew what was coming.

“The vet did turn round to me and say, ‘I advise that you’re not in here’. And I was like, ‘No, I rescued him and I’ve kept him for this long. So I’m going to see him through to the end’. Which I did. I stayed with him, I cuddled him. It was very difficult.”

Presenter Paul O’Grady then said: “I think you’ll agree with me that there are few things worse than losing a dog. I’ve just lost my Boycie.”

Rachel continued: “Frank had the biggest, brownest teddy bear eyes. Very loving dog, very loyal dog and always out to please. He left a very big hole. There’ll only ever be one Frank.”

Reacting on Twitter, viewers were heartbroken over Frank, and for Rachel.

One said: “#pogdogs Frank looked just like my girl who I lost last year. I’m in absolute bits, I hope they’re together somewhere.”

A third put: “I managed to hold it together, until Frank #POGDogs.”

I managed to hold it together, until Frank 😢💔#POGDogs

Read more: Paul O’Grady compared to a ‘stripper’ after sharing throwback to his The Bill days

“In tears at #pogdogs,” someone else said, adding: “RIP Frank.”

A fifth tweeted: “#pogdogs poor Frank, but at least he had a good life.”

“Frank was such a special dog,” read a tweet from the Battersea Twitter page. “He will never be forgotten #POGDOGS.”

In tears at #pogdogs RIP Frank 🐶💙

#pogdogs 😭😭 poor Frank but atleast he had a good life

Frank was such a special dog – he will never be forgotten. 💙 #POGDOGS pic.twitter.com/q33DXDDOYM

What did you think of Rachel’s story about Frank on For the Love of Dogs? Leave us a comment on our Facebook page @EntertainmentDailyFix and let us know.