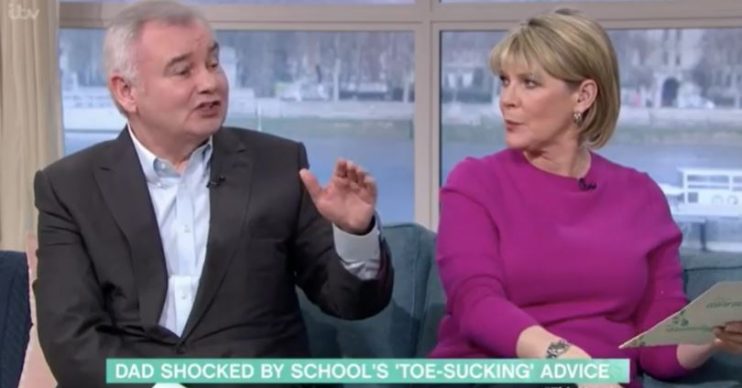 Presenters Eamonn Holmes and Ruth Langsford had This Morning viewers cringing during a bizarre discussion about sucking toes.

The co-hosts, who are filling in for regulars Phillip Schofield and Holly Willoughby during half term, were discussing the raunchy activity when Eamonn likened Ruth‘s feet to those of a goat.

They were talking about a viral article that included toe-sucking in a list of suggestions for showing your partner you love them, when the odd topic came up.

The couple were joined on the couches by singer and actor Martin Kemp and his wife, Shirlie.

Eamonn insisted: “I have beautiful toes, lovely. Do you [Ruth] even look at them?”

Ruth, looking bemused and unimpressed, replied: “Do I suck them? No!”

Eamonn quipped, “You’ve got the feet of goats” and lamented the fact that even the “beauty” of his toes “could not entice [Ruth] to do anything”.

Shirlie then asked if toe-sucking is really “necessary” and Eamonn joked he would “like to find out”.

Eww, no to toe sucking.

One wrote, with a laughing crying emoji: “You don’t love me #ThisMorning. You never suck my toes.”

Someone else tweeted: “Eww, no to toe sucking #ThisMorning.”

Another Twitter user said, “Anyone who sucks toes is a sicko. The End. #ThisMorning” and added in a separate tweet, “The thought of it makes me want to vomit everywhere!”

Anyone who sucks toes is a sicko. The End. #ThisMorning

Hahah, the thought of it makes me want to vomit everywhere!

Eamonn has been married to Ruth for almost 10 years.

But that didn’t stop the presenter from having a go at his This Morning co-star over the gift she got him for Valentine’s Day this year.

On Friday’s show, a caller scolded Eamonn after he admitted he wasn’t that impressed by Ruth’s choice of present – a luxury bag to put your toiletries in when you go to the airport.

The host, who shares 17-year-old son Jack with Ruth, said of the gift: “Ruthie left me a present this morning, there was a bag beside my table. I delved into it and took out a plastic bag, container, a see-through sort of makeup bag thing.”