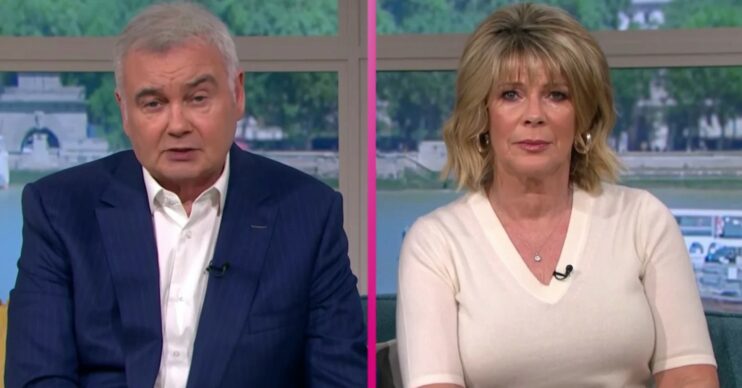 The pair are currently hosting their final week on This Morning

Eamonn Holmes has responded to a fan message urging him and Ruth Langsford to join Good Morning Britain.

The married pair are currently hosting their final week on This Morning over summer.

But it appears that viewers are already keen for Eamonn and Ruth to front another popular ITV show.

The much-loved star responded to the fan on Twitter yesterday (August 24).

The user wrote: “When @RuthieeL and @EamonnHolmes time is up on #ThisMorning they can take over #GMB sorted!”

Eamonn, 61, replied to the comment with a series of grinning face emojis.

Meanwhile, plenty of other users seemingly agreed with the message.

Responding to Eamonn, one said: “Well Eamonn you did used to present GMB as a stand in presenter so why no more? Would love to see you back.”

Another added: “Excellent idea you both would be perfect @GMB or maybe @BBCBreakfast instead?”

A third shared: “Would be great with Susanna Reid.”

Ruth gets the giggles on This Morning

Meanwhile, earlier today (August 25), Ruth lost it during an hilarious moment alongside Eamonn.

It came after her husband showed her a funny image in the advertisement break.

As she erupted into laughter, Ruth attempted to explain the photo.

She said: “Stop showing me that,” as Eamonn put his phone down.

Eamonn said: “What? What? You can’t leave people hanging there.”

Ruth, also 61, added: “Someone sent a picture of Eamonn and if you zoom in on his neck, it looked a bit odd.

“Sorry I wish I could say because it’s really annoying when people do this.”

The host couldn’t contain her laughter, as she apologised with tears streaming down her face.

Eamonn and Ruth are hosting their final week on the show, before Rochelle Humes and Vernon Kay take over next week.