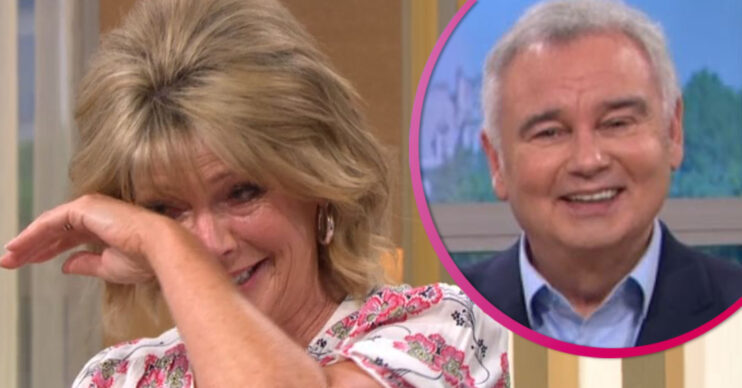 Ruth had a giggling fit live on air

This Morning host Ruth Langsford couldn’t contain her laughter today after seeing a photo of her husband Eamonn Holmes.

On Wednesday’s show, Ruth became giggly after Eamonn had showed her a funny image in the advert break.

But Ruth got the giggles so bad that she couldn’t even read the autocue, leaving Eamonn having to read it out.

Ruth Langsford on This Morning

As the pair returned from a competition, Ruth said to Eamonn: “Stop showing me that,” as Eamonn put his phone down.

Eamonn said: “What? What?” as Ruth descended into laughter.

He added: “You can’t leave people hanging there.”

Laughing, Ruth said: “Stop it. You know what,” as she wiped away tears.

Ruth was then set off again as she struggled to contain her laughter.

She said: “Someone sent a picture of Eamonn and if you zoom in on his neck, it looked a bit odd.

“Sorry I wish I could say because it’s really annoying when people do this. Anyway, you better read that bit.”

As Ruth continued giggling, Eamonn joked: “Sometimes do you not embarrass yourself? Do you let yourself down?”

As tears streamed down her face, Ruth said: “Lottie’s down in the makeup room very cross with me now.”

She then told Eamonn: “Go on, go!” referring to the autocue.

Eamonn read his line and then passed to Ruth, who began her bit: “Yeah, today it’s time to find out…”

Struggling to continue, she said: “You’ll have to do it. Sorry!”

Viewers were in hysterics over Ruth on the show and shared their thoughts on Twitter.

One person said: “It was great to see Ruth in fits of laughter I’m going to miss you both so entertaining.”

Another laughed: “That was hilarious… Loved @RuthieeL having a gigglefest… was just so funny.”

Eamonn and Ruth are hosting their final week of the summer before Holly Willoughby and Phillip Schofield return next month.