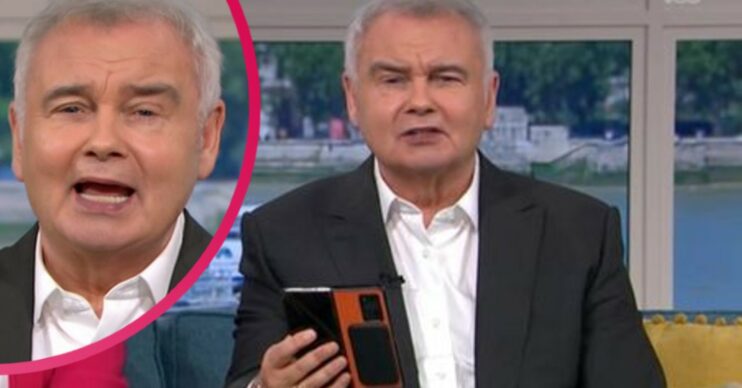 The ITV presenter became the butt of a viewer's joke

Eamonn Holmes was left embarrassed by his appearance on Tuesday’s (August 24) This Morning.

As the show began, viewers raced to Twitter to suggest that there had been a makeup mishap.

Apparently, a fan at home thought Eamonn was wearing too much of it!

To make matters worse, it was Eamonn that read out the remarks himself while on the sofa.

What did Eamonn Holmes say on This Morning today?

Reading the comment aloud, he said: “‘Eamonn Holmes looks very different this morning – overdone it with the makeup I think. He looks like he’s just about to audition for a dame in panto.’

“Thanks, Emma,” he exclaimed. “It’s just lovely to know what people think of you!”

Eamonn’s wife, Ruth Langsford, then demanded the cameras give viewers a close-up of her co-star.

Eamonn then joked: “You must send me a picture of yourself Emma – we can compare.”

It’s been a tough month for Eamonn, who found himself in hot water after referring to a co-star’s appearance.

More than 150 complaints were made to Ofcom after he compared Dr Zoe Williams’ hair to that of an alpaca.

There was a fiery social media backlash following Eamonn’s comment, and a clip of the incident went viral.

As a result, Eamonn took to Twitter to apologise to his co-star.

He said on Twitter last week: “Hey everyone out there. if my attempt at being humorous with my friend @DrZoeWilliams was misjudged I am mortified and humbly apologise to anyone who was offended.”

Zoe later told fans that Eamonn had apologised to her directly and that she had accepted.

“I feel torn as on the one hand it pains me to see the abuse that Eamonn has been receiving because of this,” she said.

“But on the other hand, it has opened the door to a conversation that I feel needs to be had.”