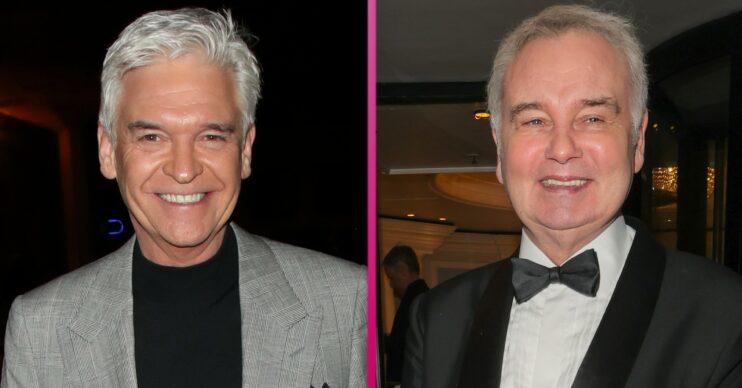 Eamonn Holmes has taken aim at Phillip Schofield – his former This Morning co-star – branding him “passive-aggressive”.

The veteran telly presenter, 62, made the dig as he discussed his and wife Ruth Langsford’s axing from This Morning.

Eamonn and Ruth had presented the Friday instalment of the ITV show for 15 years before they were given the chop.

They also covered for permanent hosts Phil and Holly Willoughby during the holidays.

But speaking to the Daily Mail’s Weekend magazine, Eamonn has now made his feelings about Phillip clear.

What has Eamonn Holmes said about Phillip Schofield?

In April 2019, Phil cut Ruth off during a brief trailer segment with the Loose Women panel.

Ruth had been telling he and Holly what viewers could look forward to that day, when he said: “Guys, we’re going to have to jump in there and stop you I’m afraid because we’re a bit tight for time at this end.”

Furious Ruth, 61, shot back: “I only had about three more words to say.”

Eamonn has now said he was “hurt” by 59-year-old Phil’s behaviour towards his wife that day.

“Phillip is renowned for snubbing people,” he told Weekend.

“He’s very passive-aggressive. It’s up to Ruth to say how she felt, but I was feeling hurt for her.

When were Eamonn and Ruth dropped from This Morning?

In a decision that devastated fans, Eamonn and Ruth were given the chop from This Morning in late 2020.

It was suggested at the time that the couple were “not in line with the youth drive”.

Insiders even claimed Eamonn felt he was considered too  “pale, stale and male”, with bosses keen to modernise the show.

A source told The Sun at the time: “The shows execs have some very tricky decisions.

“Eamonn fears he is basically too ‘pale, stale and male’, and, at 60, perhaps not in line with the youth drive broadcasters are after.”

The TV couple have since been replaced by Alison Hammond and Dermot O’Leary.

Ruth remains as a regular anchor on Loose Women. She also has a hugely successful fashion line with shopping channel QVC.

Do you miss Eamonn and Ruth on This Morning? Leave us a comment on our Facebook page @EntertainmentDailyFix and let us know.