After reportedly being ‘axed’ from This Morning, Eamonn Holmes is set to make a “massive” career “move”.

With wife Ruth Langsford poised to make her return to the ITV daytime show later this summer, Eamonn is heading in a different direction.

And pals have praised the star for the “massive” career move. 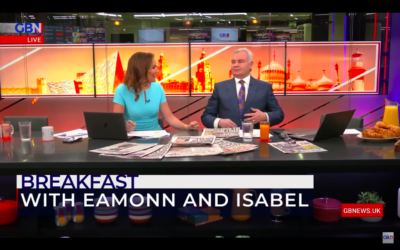 He posted his congratulations on social media yesterday (August 5).

He revealed that Eamonn’s GB News show was on the move.

It’s switching channels and will nestle nicely between Sky News and BBC News on TV planners.

Sharing the news, he said: “@GBNEWS @EamonnHolmes @IsabelWebster_  @GloriaDickie will be moving to Channel 604 between @SkyNews and @BBCNews Parliament.”

Eamonn retweeted the news to share it with his followers.

It’s the only news show I watch now.

“It’s the only news show I watch now,” declared another.

GB News confirmed the news “was correct” when ED! approached them for comment.

What has Eamonn been up to since leaving This Morning?

Eamonn Holmes announced last December that he was hosting a new show with GB News.

He went on to join the GB News Breakfast show with presenter Isabel Webster.

Eamonn hasn’t been shy when it comes to his allegations about ITV since leaving.

“The point is I did not resign from ITV. ITV resigned from me. And I never received a single explanation once why they wanted rid of me,” The Mirror reported.

Wife Ruth, meanwhile, will return to This Morning this summer for a hosting stint alongside screen “son” Rylan Clark.